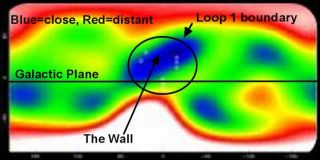 When stars explode as supernova, they carve giant bubbles in space. Our own solar system is enveloped by such a structure from a long-ago explosion.

Now scientists have shown that our bubble is being pinched and bullied backward by another expanding bubble forged from multiple supernovas.

Our bubble is called the Local Bubble by astronomers. It's shaped like an hourglass. The bully goes by the name of Loop 1 Superbubble; it's the result of several exploded stars over the past few million years, researchers figure.

Superbubble is expanding faster than Local Bubble, so it compresses an area of cool dense gas, known as the Wall, situated between the two shells. In fact, the new study concludes, this interaction is what gives our bubble the waist in its hourglass shape.

The observation was made with the European Space Agency's XMM-Newton Space Telescope. It wasn't easy.

"The X-ray radiation from the bubbles is very faint.  In order to see them, we've had to remove all the light from stars, nebulae and cosmic rays the images, leaving only the weak X-ray signal," said University of Leicester researcher Michelle Supper, who presented the results yesterday the National Astronomy Meeting of the Royal Astronomical Society. "It's the astronomical equivalent of looking at an aquarium, ignoring the fish and looking only at the water."

The density of gas in the waist of the hourglass is four times more intense than elsewhere along the Wall. Pressure also peaks there.

From where we sit, the edge of the Local Bubble is at least 91 light-years away in one direction and 358 light-years in the opposite. Superbubble is 895 light-years across. A light-year is the distance light travels in a year, about 6 trillion miles (10 trillion kilometers).