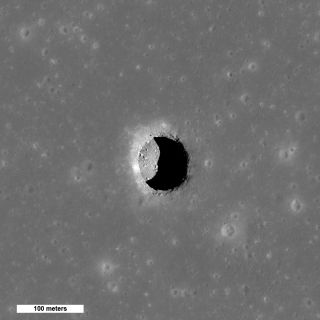 An image from the LRO shows a pit crater on Mare Tranquillitatis, with boulders lying on an otherwise smooth floor.
(Image: © NASA/GSFC/Arizona State University)

Scientists have found hundreds of pits on the lunar surface that could provide shelter to astronauts exploring the moon.

Some of the pits, which are primarily located inside larger craters on the moon, are nearly 3,000 feet (900 meters) wide, researchers said. NASA showcased the lunar pits in a new video about moon caves and future exploration.

"Pits would be useful in a support role for human activity on the lunar surface," Robert Wagner, of Arizona State University, said in a statement. Wagner developed an algorithm that scanned thousands of high-resolution images of the moon captured by NASA's Lunar Reconnaissance Orbiterand served as lead author on the paper that identified the pits.

"A habitat placed in a pit — ideally several dozen meters back under an overhang — would provide a very safe location for astronauts: no radiation, no micrometeorites, possibly very little dust, and no wild day-night temperature swings," Wagner added. [Destination Moon: The 350-Year History of Lunar Exploration (Infographic)]

The surface of the moon is a varied place, covered with craters, dark volcanic deposits known as maria and impact melt ponds formed when the rocky surface melted in the heat of a cosmic collision.

Wagner and his team discovered more than 200 pits in the melt ponds of 29 craters. An additional eight pits, including the three spotted by the Kaguya spacecraft, lie in the lunar maria and two more sit in the highlands.

As the Lunar Reconnaissance Orbiter (LRO) has imaged just 40 percent of the moon with the lighting necessary to automatically detect pits, Wagner expects to find another two to three maria pits and potentially more than 100 more impact melt pits. Even more tunnels may exist that are too small to conclusively identify from orbital imagery.

The origin of the pits remains a mystery despite LRO's detailed images. One possible cause is the collapse of a cave or void after a meteorite impact, Wagner said.

Lunar tunnels could also form as molten rock flows beneath the moon's crust. On Earth, lava flowing beneath a solid crust creates lava tubes, which remain even after the molten rock drains away. The same process could occur on the moon, Wagner said. The interiors of large impact craters take hundreds of thousands of years to form. As gravity causes crater walls to slump, the floor could be pushed up, allowing lava to flow beneath the surface to create lunar lava tubes.

Exploration of the pits to study their formation and other characteristics would require more than LRO, researchers said.

"Pits, by their nature, cannot be explored very well from orbit — the lower walls and any floor-level caves simply cannot be seen from a good angle," Wagner said. "The ideal follow-up, of course, would be to drop probes into one or two of these pits and get a really good look at what's down there."

Wagner said he and his colleagues are currently in the very early design phases of a mission concept to explore one of the largest maria pits.

The research was published in the journal Icarus.