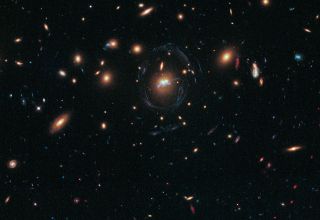 The curly string is about 100,000 light-years long and sports blue "pearls" — actually huge young star clusters — every 3,000 light-years along the way, researchers said. You can zoom in on the beautiful structure, and learn more about it, in this new Hubble video.

"We were surprised to find this stunning morphology," study leader Grant Tremblay, of the European Southern Observatory in Garching, Germany, said in a statement. "We've long known that the 'beads on a string' phenomenon is seen in the arms of spiral galaxies and in tidal bridges between interacting galaxies. However, this particular supercluster arrangement has never been seen before in giant merging elliptical galaxies."

Their merger has sparked an intense burst of star formation, resulting in the creation of the clusters of young, blue stars. The physics behind the string-of-pearls structure are similar to the processes that cause rain to fall in drops as opposed to steady streams, researchers said.

It's unclear where the cold gas that's fueling the star formation came from. It may have existed all along within the two merging galaxies, or it may have condensed from the bubble of superhot plasma surrounding the duo, perhaps cooling out of the shock wave created by the cosmic collision, researchers said.

"Whatever the origin for this star-forming gas is, the result is awesome," Tremblay said. "It's very exciting. You can't find a mundane explanation for this."

The bright blue arcs surrounding the galaxy cluster in the new Hubble photo are light from distant galaxies, which the cluster's powerful gravity has warped into strange patterns, researchers said.