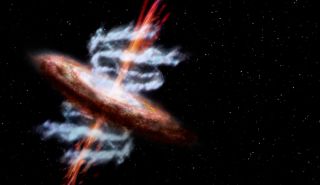 This artist’s impression shows a galaxy releasing material via two strong jets (shown here in red/orange), as well as through wide-angle outflows (shown in gray/blue). The black hole at the galaxy’s center drives both jets and outflows.
(Image: © ESA/AOES Medialab )

Europe's next large-scale space mission will study supermassive black holes, gamma-ray bursts and other aspects of the high-energy universe.

The European Space Agency (ESA) has selected the Athena X-ray observatory as its second "large-class" science mission. Athena — which will cost about 1 billion euros ($1.36 billion at current exchange rates) — is scheduled to blast off in 2028.

The mission will address two main questions, ESA officials said: 1) How does "normal" (i.e., not dark) matter come together to form the universe's large-scale structure; and 2) How do black holes grow and shape their surroundings?

"Athena will be a state-of-the-art observatory that will provide a significant leap forward in scientific capabilities compared with previous X-ray missions, and will address fundamental open questions in astrophysics," Alvaro Giménez, ESA's director of Science and Robotic Exploration, said in a statement late last month.

Athena, whose name is short for "Advanced Telescope for High-Energy Astrophysics," will be the largest X-ray telescope ever built, featuring a 10-foot-wide (3 meters) X-ray mirror along with an array of scientific instruments, researchers said.

The spacecraft will observe radiation emitted by material about to be swallowed by supermassive black holes, which lurk at the heart of most, if not all, galaxies. Athena will also measure how fast these black holes are spinning, ESA officials said.

In addition, the telescope will shed light on a number of other astronomical phenomonena, from faraway gamma-ray bursts to the super-energetic auroras that dance in Jupiter's thick atmosphere, researchers said.

The telescope will launch to the Earth-sun lagrange point 2 (L2), a gravitationally stable spot in space about 930,000 miles (1.5 million kilometers) from Earth. A number of other ESA spacecraft have also gone to L2, including Planck, which is studying the radiation left over from the Big Bang, and Gaia, which is mapping 1 billion Milky Way stars with high precision.

Athena is the second large-scale space mission chosen by ESA under its "Cosmic Vision 2015–25" plan. The first was the Jupiter Icy Moon Explorer (JUICE), whose selection was announced in May 2012. The JUICE spacecraft is scheduled to launch in 2022, on a mission to study the huge Jupiter moons Callisto, Ganymede and Europa.