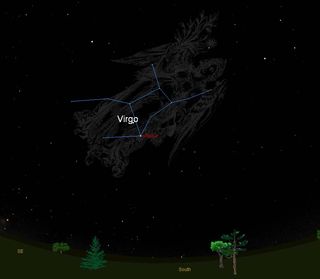 The three largest constellations are gracing the evening skies.

Hydra, the sea serpent; Virgo, the maiden; and Ursa Major, the big bear are visible in the night sky right now. Hydra lies mainly in the southwestern part of the sky, though the tip of the tail will not slither across the meridian, and eventually out of view, until 9:30 p.m. local time. Hydra spans more than one-quarter of the sky but has little to show besides mere length.

The mythical creature's head is a pretty little group of five stars hovering low above the western horizon by nightfall. From there, if the sky is clear and dark, you can follow the scraggly stream of the snake's body. It goes southeastward below the sickle of Leo, past the gobletlike Crater; the Cup; and Corvus, the crow. Then, it heads south of the blue star, Spica, and on out of sight, almost as far as red Antares of summer. [See images of famous constellations in the night sky]

Hydra's brightest star is a red, second-magnitude star named Alphard, which means "the lonely one."  Once you've found it, you'll understand why it's named as such. It actually seems brighter than it really is because it's in a large, dull region and has no competition nearby. Some say Hydra commemorates the fabled multiheaded serpent that gave the mighty Hercules so much trouble. Yet the celestial Hydra has only one head.

To the surprise of even some veteran stargazers, there is also another celestial water serpent — Hydrus — which can be found during autumn months not far from first-magnitude Achernar at the southern extremity of Eridanus, the river. Hydra is sometimes called the female water serpent and Hydrus the male water serpent.

The description of Hydra as the largest constellation in the sky refers to its total area in square degrees, according to the official boundaries established by the International Astronomical Union (IAU). Hydra covers 1,303 square degrees, or 3 percent of the celestial sphere. Considering the linear extent of this beast — it meanders across 95 degrees of the sky and takes nearly seven hours to fully rise into view — this is easy to believe.

It is far less obvious, on the other hand, that Virgo is the second-largest constellation, with an area of 1,294 square degrees. The main reason is that, in order to see the official IAU boundaries, you would have to consult a star atlas, such as Norton's. Most standard star charts, which include only the principal naked-eye stars, often do not give an accurate idea of constellation size.

However, anyone seriously interested in the sky should supplement their sky charts with a good star atlas. A map of the United States or Illinois does not help people find their way around Chicago, for example; a detailed street map is needed. Similarly, a star atlas will provide the boundary lines for the constellations that were adopted in 1930.

So, the onetime picturesque patterns of people, animals and objects have now evolved into arbitrarily defined areas of the sky. Indeed, some professional astronomers think of the constellations as nothing more than foolish old figures and would prefer that they be removed entirely.

But the constellations have survived, and occupying much of the southern sky these early evenings is the fair maiden known as Virgo. Unlike most of the ancient constellations, Virgo presents no distinctive pattern of stars to attract attention.

In Greek and Roman tradition, the "maiden" was identified with the goddess of justice, Astraea, who ruled the world during the fabled Golden Age. In the old allegorical star books, the goddess holds some spikes of wheat in each hand, and her brightest star — Spica — glows in one of the ears of grain hanging from her left hand. Spica is the 16th-brightest star in the sky and 250 light-years away. [How well do you know your constellations? Take our quiz]

Also located within Virgo is one of the most remarkable areas of the heavens, known as the Virgo Cluster or the Realm of the Galaxies. A celestial wonderland of star cities numbering in the thousands, the probable total figures become staggering in light of the assertion by reputable astronomers that the average mass of each galaxy is some 2 hundred billion times the mass of the sun. The best estimates indicate that they are located somewhere between 40 million and 70 million light-years from Earth.

Some people occasionally ask why the constellation patterns differ from other similarly designed charts and are not standardized. The two main reasons are that different people see constellations in different ways, and that, as far as astronomy today is concerned, constellations are not considered star pictures but as specific sky areas. Before 1930, no two atlases agreed as to the limits, and much confusion resulted.

Most people regard the Big Dipper as the leading star group in the Northern Hemisphere sky, and most astronomy books use it as a jumping-off place for locating other star patterns. During the early evening this week, the Dipper is nearly overhead. What is remarkable is that these seven stars and the others surrounding it comprised a bear to widely separated early peoples — not only to Old World ancients, but also New World Native American tribes. The bear's nose is third-magnitude Muscida. The bear's paws, known to early Arabs as the "leaps of the gazelle," are marked by an almost equally spaced set of three pairs of stars. The Dipper's bowl is the torso.

But how to explain the abnormally long tail, marked by the Dipper's handle? British writer Thomas Hood (1799-1845) speculated: "Imagine that Jupiter, fearing to come too nigh unto her teeth, lay hold on her tail, and thereby drew her up into the heaven; so that she of herself being very weighty, and the distance from the earth to the heavens very great, there was great likelihood that her tail must stretch. Other reason know I none."

Editor's Note: If you capture an amazing night sky photos, or any other amazing celestial view, and you'd like to share it with Space.com for a possible story or image gallery, please contact us at spacephotos@space.com.

Joe Rao serves as an instructor and guest lecturer at New York's Hayden Planetarium. He writes about astronomy for Natural History magazine, the Farmer's Almanac and other publications, and he is also an on-camera meteorologist for News 12 Westchester, New York. Follow us @Spacedotcom, Facebookand Google+. Original article on Space.com.