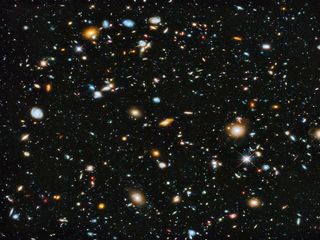 Patrick McCarthy was part of the Wide Field Camera 3 science team and currently serves as director of the Giant Magellan Telescope Organization. He contributed this article to Space.com's Expert Voices: Op-Ed & Insights.

In the fall of 1917, after a decade of labor, the 100-inch (2.5-meter) telescope at Mount Wilson in Southern California was dedicated. Edwin Hubble would spend many cold nights at the Newtonian focus of the instrument, which was the world's largest telescope at that time. Now, nearly a century later, another 100-inch telescope — the aptly named Hubble Space Telescope (HST) — has just provided the most complete, informative and breathtaking image of the deep universe.

Hubble and his assistant, former mule skinner Milton Humason, made painstaking, long exposures to obtain the sharpest images and spectra of the spiral nebula. Hubble showed that nebulae are "island universes" like Earth's own Milky Way galaxy, but at vast distances. Hubble improved scientists' understanding of the size of the cosmos by orders of magnitude. More remarkably still, he discovered that the universe of galaxies is not static, but rather expanding at an astonishing rate.

The new Hubble Ultra-Deep Field is humanity's first truly "full color" image of the cosmos. By combining deep ultraviolet with visible light and near-infrared images of distant galaxies, the pan-chromatic deep field allows scientists to trace the birth, life and death of stars across the full span of cosmic time. The Ultra-Deep Field provides an awe-inspiring view of more than 100,000 galaxies — a small but representative sampling of the more than 100 billion galaxies in the observable universe.

Galaxies like Earth's own Milky Way are composed of roughly 100 billion stars. Some, like the sun, emit most of their radiation in the visible band — with wavelengths between 0.3 and 1.0 microns. Others, like the red giant Betelgeuse in Orion, emit copious radiation in the infrared, while the massive young star Rigel, also in Orion, pumps much of its prodigious output of photons in the vacuum ultraviolet, light with wavelengths less than 0.3 microns that is absorbed by ozone in the Earth’s upper atmosphere.

If you think of a galaxy as an orchestra — an ensemble of players that work in harmony to produce a whole greater than its parts — the visible light samples the violins and the brass, the infrared captures the bass and kettle drums, while the ultraviolet picks out the flutes, piccolos and triangles.

In the case of galaxies, the ultraviolet-bright stars carry the tune of creation — they trace the formation of stars and the conversion of hydrogen to helium, and then helium to carbon, nitrogen and oxygen, and on through the periodic table to iron. The white-to-yellow stars, the midrange of the galaxy spectral band, is filled by middle-mass and middle-aged stars. The long-lived low-mass dwarf stars are vast in number, and like the bass viola, provide a foundation to the orchestra out of the limelight occupied by the brighter instruments. The young massive stars shine brightly in the ultraviolet for a short time and then exit the stage via spectacular supernova explosions.

The first Hubble Deep Field image, captured in 1994, changed scientists' view of the universe by revealing a rich tapestry of galaxies with shapes and structures foreign to the galaxy shapes that are seen in the universe today. Many are in the throes of violent collisions and mergers that may transform them from one type of galaxy — such as spirals like the Milky Way — into other types, like the massive elliptical galaxies that are dominated by random orbits rather than orderly rotation.

A major technical addition to Hubble's suite of cameras has allowed astronomers to first add the infrared, and now the ultraviolet, to create the Hubble Ultra-Deep Field images. For the first time, astronomers can hear the full orchestra of galaxies and their constituent stars. Wide-Field Camera 3, the instrument that revitalized HST in 2009, is a marvel of technology. It contains two separate cameras — one optimized for the ultraviolet, and the other for the infrared. Each uses optics crafted to optimize performance in the selected waveband and focused on state-of-the-art detectors. The ultraviolet camera uses a charge coupled device (CCD) similar to that found in handheld digital cameras, but optimized for low-light-level work in the harsh environment of space. The infrared camera uses a diode array that is only sensitive to light in the range from 0.6 microns to 1.7 microns. This makes it blind to the thermal radiation from the warm optics on Hubble. By staring deeply into space for hundreds of hours, the camera collected a handful of photons per galaxy — photons that have traveled for billions of years before reaching Hubble's mirror.

The Deep Field provides a rich image of the distant cosmos, but many of the key questions regarding the evolution of the universe require spectroscopy — the dispersal of the light into its constituent colors — to reveal their distances, masses and internal dynamics. Fortunately, there is a new generation of telescopes on the horizon, both in space and on the ground, that promise to revolutionize our understanding of the distant universe.

NASA, the European Space Agency (ESA) and the Canadian Space Agency are poised to launch the successor to Hubble — the James Webb Space Telescope — in 2018. The Webb is optimized for the near- and mid-infrared, and will produce redshifts and internal dynamics for many thousands of galaxies. With its 21-foot-diameter (6.5 meters) primary mirror, cooled to the frigid temperature of minus 387 degrees Fahrenheit (minus 233 degrees Celsius), Webb will have unmatched sensitivity at wavelengths longer than 2 microns.

A new generation of giant telescopes are also under construction here on Earth. These "extremely large telescopes" will have 100 times the light-gathering power and 10 times the angular resolution of Hubble. I am involved in the development of one of these, the Giant Magellan Telescope, being designed by an elite engineering team in Southern California, while its giant mirrors are taking shape in a high-tech optics laboratory in Arizona. Our team has already prepared its future home high in the Chilean Andes, and over the next several years, hundreds of scientists, engineers and construction workers will assemble the 82-foot-diameter (25 m) telescope so that, as the next decade starts, astronomers will have a new tool for exploring the first few hundred million years after the Big Bang. Two other giant telescopes are also under development: the Thirty Meter Telescope in Hawaii, and another in the far north of Chile, the European Extremely Large Telescope.