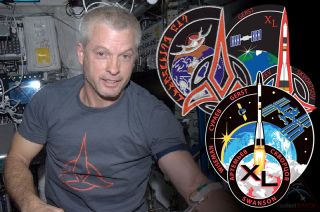 In a mirror universe right now, an alternate Steve Swanson is wearing a space patch bearing the logo of the fictional Klingon Empire.

In this reality, NASA jettisoned the astronaut's "Star Trek" inspired emblem before it could reach space.

Swanson, who currently is commander of the International Space Station, collaborated with his daughter to create an insignia for the outpost's Expedition 40 crew. What he and his fellow astronauts and cosmonauts ultimately launched with to the space station was a patch depicting the "past, present, and future of human space exploration." [Image: Astronaut’s Cloaked Klingon Space Patch]

What Swanson had first proposed however, was a badge of a decidedly different type.

"He wanted something that was kind of badass," revealed Mary Swanson, Steve's wife, in a call with collectSPACE, "and Klingons are kind of badass."

Steve and Caroline Swanson's original idea for the patch derived its shape and trefoil logo from an emblem created for the Klingon "Brotherhood of the Sword," as seen on the 1990's television series "Star Trek: The Next Generation."

"Steve grew up watching 'Star Trek,'" Mary explained. "We watched reruns early in our marriage. We watched 'Next Generation' pretty religiously. So, yeah, he is somewhat of a fan."

Swanson and his daughter, a computer science major who began her studies in graphic design, modified the Klingon patch, replacing its image of a sword-like weapon called a "Bat'leth" with a similarly-shaped icon depicting the space station. A Klingon language inscription along the border of the original emblem was supplanted by the Swansons with the names of the six-person Expedition 40 crew.

The Klingon logo from the original patch was also altered to envelop a Russian Soyuz rocket, like the type Swanson and his crewmates used to launch to space.

Swanson, together with cosmonauts Alexander Skvortsov and Oleg Artemyev lifted off for the station in late March. They were joined on orbit by Reid Wiseman of NASA, Max Suraev of the Russian federal space agency Roscsomos, and Alexander Gerst with the European Space Agency on May 28. The two three-member Soyuz crews departed the planet from Russia's Baikonur Cosmodrome.

In the original 1960s "Star Trek" series, the Klingons were created as an allegory for the Russians, the threat of the Klingon Empire evoking the Cold War with the then-Soviet Union.

But it was not international politics that attracted Swanson to employing the “Star Trek” design. Rather, he wanted to pay tribute to the role that science fiction has had inspiring real space explorers, as he wrote in the caption describing his and his daughter's initial design.

"He mentioned 'Star Trek' and the influence that television and movies about space travel have had on him and the youth of America, or the world even," Mary Swanson said, "and how [the patch] was paying homage to how that has stirred the imaginations of thousands of people and made them want to maybe become astronauts, or at least work in the space program."

"It was a good thing," she added. "It wasn't promoting Star Trek or anything like that, but that it influenced him and he wanted to honor that."

But like one of the Klingon Bird-of-Prey warships, NASA's lawyers swept in and said no.

Bowing to copyright concerns, the expedition's patch had to be redesigned. The Soyuz rocket still remained, but the Klingon influences were removed.

"The patch ended up really not having anything familiar [to the original art]," Mary Swanson said. "He did carry over some [of the shape of the original patch] but added more of a roundness — before it was more pointy."

His Klingon patch was grounded, but as it turns out, Steve Swanson still found a way to fly the trefoil logo in space.

Posting where no astronaut had posted before, Swanson inaugurated the on-orbit use of the space station's official Instagram account. In April, he shared a few selfies on the photo-sharing social network.

His second shot showed him having blood drawn for study but it wasn't the science experiment that drew attention to the photo. Swanson is seen wearing a t-shirt emblazoned with a certain three-pointed emblem, a cloaked reference to the patch that almost was.