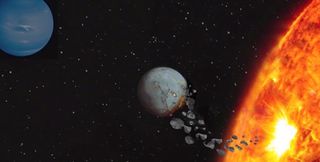 Some stars that give birth to Earth-like rocky planets only to later devour those same daughter worlds, and now scientists say they have a way to find the stellar cannibals.

A team of astronomers say they've developed a way to detect planet-eating stars using their chemical signature. The new method could bolster the search for alien planets outside our solar system, the researchers say.

Rocky planets like Earth, Mars and Venus tend to form relatively close to their parent star, while gas giants like Jupiter develop in the cooler outskirts of the planetary system. But after they are fully formed, gas giants begin to creep inward and their gravity starts to tug on their terrestrial siblings, explained study researcher Trey Mack, an astronomy graduate student at Vanderbilt University. [7 Ways to Find Alien Earths: An Exoplanet Countdown]

"With the right amount of pulling and tugging, a gas giant can easily force a rocky planet to plunge into the star," Mack said in a statement. "If enough rocky planets fall into the star, they will stamp it with a particular chemical signature that we can detect."

Mack and colleagues looked at the binary pair of G-class dwarf stars dubbed HD 20781 and HD 20782, which were formed out of the same celestial dust cloud and now both host their own planets: one is circled closely by two Neptune-size planets; a single Jupiter-size planet orbits the other.

Different elements absorb light in different ways. By looking at the wavelengths of light or spectra of a star, scientists can determine the abundance of certain elements it contains.

Spectra from HD 20781 and HD 20782 showed that these stars, compared with sun, were high in refractory materials — building blocks for Earth-like rocky planets, such as aluminum, silicon, calcium and iron that have melting points higher than 1,200 degrees Fahrenheit (600 degrees Celsius).

The results of the study were published May 7 in the Astrophysical Journal.