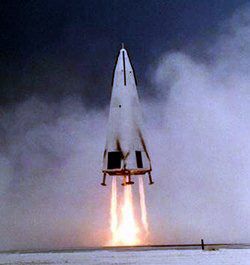 Blue Origin rocket concept is patterned after the DC-XA that was operated by NASA and the Department of Defense under the Reusable Launch Vehicle program. The flight vehicle was tested at White Sands during the summer of 1996, and demonstrated a 26-hour turnaround between its second and third flights, a first for any rocket. After the fourth flight, however, the DC-XA suffered severe damage and the program ended due to lack of funding.

The public space travel business is picking up suborbital speed thanks to a variety of private rocket groups and their dream machines.

Joining the mix is Blue Origin's New Shepard Reusable Launch System. It is financially fueled by an outflow of dollars from the deep pockets of billionaire Jeff Bezos, founder of Amazon.com.

The document is the best glimpse yet of what Blue Origin is scoping out to develop "safe, inexpensive and reliable human access to space."

The more than 200-page draft EA is a necessary step required by the FAA/AST for Blue Origin to get the needed permits and/or licenses to fly their rocket hardware.

Also on the group's to do list at the site is putting in place a vehicle processing facility, a launch complex and vehicle landing and recovery area, as well as an astronaut training facility, and other minor support amenities [Map].

The strategy is to build the New Shepard suborbital vehicle incrementally, starting with low-altitude tests, progressing to higher-altitude testing, and culminating with commercial flights. Early testing would use prototype vehicles that are smaller and/or less capable than the proposed final design.

As detailed in the EA, the New Shepard RLV system would be comprised of a propulsion module and a crew capsule capable of carrying three or more space flight participants on roundtrip treks from the ground to the edge of space. The crew capsule is perched on top of the propulsion module. The stacked vehicle would have a roughly nose cone shape with a base diameter of approximately 22 feet (7 meters) and a height of approximately 50 feet (15 meters).

Because Blue Origin's launch vehicle would ascend and descend vertically, sonic booms would propagate away from the Earth's surface during launch and towards terra firma during descent.

The New Shepard test pad would be up to 32,292 square feet (3,000 square meters) in area. A separate flat landing pad of equal size would be located 3.8 miles (6.1 kilometers) north of the Blue Origin vehicle processing facility.

The New Shepard RLV launch, flight, and landing activities would require less than a 10 minute period to complete. Powered to roughly 125,000 feet (38,100 meters) under thrust from its main engines, the spaceship would chalk up some 110 seconds of flight. From there, the RLV would coast up to a height greater than 325,000 feet (99,060 meters). At top altitude, the vehicle would then return to the landing pad under gravity free-fall conditions until the main engines are restarted to enable a powered landing.

Blue Origin has not completed development of the New Shepard vehicle or its engines, according to the EA, so no test results are available. Nevertheless, as stated in the document, a thrust of 230,000 pounds force is expected at vehicle liftoff.

Blue Origin would ship the New Shepard propulsion module and crew capsule RLVs to the West Texas Launch Site separately. The RLVs would originate at Blue Origin's manufacturing and assembly facilities in the state of Washington and would travel via ground to West Texas. Blue Origin plans no more than ten total RLV shipments during the five-year period from 2006-2010.

Blue Origin has outlined within the pages of the EA the following activities envisioned at the West Texas launch site over the next five years. These are:

According to the EA, an experimental permit from the FAA would allow Blue Origin to carry out testing of reusable suborbital vehicles that would be launched or reentered solely for: Research and development to test new design concepts, new equipment, or new operating techniques; showing compliance with requirements as part of the process for obtaining a license; and crew training prior to obtaining a license for a launch or reentry using the design of the rocket for which the permit would be issued.

Last year, on June 14 and 15, Blue Origin conducted a series of information meetings in Van Horn, Texas and Dell City, Texas. The firm's plan to construct and operate a commercial launch facility in Culberson County, Texas was detailed at those gatherings.

A paper copy of the draft is available at the Van Horn public library in Van Horn, Texas. A public hearing on the Blue Origin EA will be held on July 25th at the Van Horn Convention Center, with the public comment period about the rocket group's plans closing two days later, Stasny told SPACE.com.

When queried by SPACE.com about their environmental assessment, Blue Origin declined to comment beyond what is detailed within their EA document.

Among a list of distinctions, a 26-hour turnaround was achieved between the DC-XA's second and third flights - a first for any rocket. The flight program ended in July 1996 with the DC-XA suffering severe damage due to a landing strut - one of four-that failed to extend. The unbalanced vehicle tipped over on its landing pad and caught fire. Due to lack of follow-up money, the program was ended.

John Garvey was the flight engineer during the DC-XA phase of testing and now runs Garvey Spacecraft Corporation in Long Beach, California. He told SPACE.com that he's keeping an eye on how Blue Origin operates New Shepard in light of what was learned during DC-X/XA testing.

Garvey advised that if the descent and landing techniques for New Shepard are similar to those employed on the DC-X/XA, then both thrust vectoring and responsive throttling of the vehicle's engines will be required. That likely means, he added, Blue Origin engineers will spend loads of time on the test stand to flight qualify the spaceship's rocket motors, especially for human-carrying operations.

"Their reported choice of hydrogen peroxide and RP-1 as propellants is interesting, particularly the hydrogen peroxide," Garvey noted. By comparison, the DC-X/XA used liquid oxygen and liquid hydrogen.

"Numerous new entrants to the rocket business have favored-at least initially - hydrogen peroxide as an oxidizer instead of liquid oxygen, usually for perceived safety reasons, even though that means sacrificing performance," Garvey observed.

However, highly concentrated hydrogen peroxide presents some unique hazards relative to liquid oxygen in flight operations as well as shipping and storage, Garvey said. Hydrogen peroxide can "rapidly decompose" if contamination is present.

"Every so often there is a story about an amateur rocketeer burning down the garage-or worse-due to such an accident," Garvey explained. "For whatever reason ... no major operational launch system has employed it for primary propulsion."