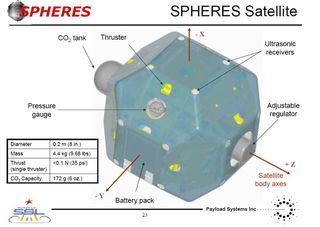 In 1999, MIT engineering Professor David Miller showed Star Wars on the first day of class. During the scene where Luke Skywalker practices his light saber against a seeker remote, Miller stood up and said "I want you to build me some of those."

On May 19, 2006 from 10:30am-1:30pm CST Miller's dream (not to mention that of George Lucas and about a zillion Star Wars fans, including me) became at least partly reality. The SPHERES mini-satellite, a tiny (eight-inch diameter) remote-controlled device, flew in the International Space Station (ISS). SPHERES stands for Synchronized Position Hold Engage and Reorient Experimental Satellites. Flight Engineer Jeff Williams "piloted" the SPHERES unit in three dimensions for the first time around the pressurized Destiny module.

According to NASA, the demonstration tested the basics of formation flight and autonomous docking that should be useful in future multiple spacecraft formation flying. The long-range plan for SPHERES is to test flying in formation with a set of mini-satellites.

The first test flight consisted of a series of 10-15 pre-planned maneuvers lasting up to 10 minutes each. Once the appropriate software was loaded on the controlling laptop, the satellite began a set of pre-programmed maneuvers to test attitude control, station keeping, re-targeting, collision avoidance and fuel balancing. The mini-satellite is manuevered using compressed carbon dioxide gas thrusters.

Although the SPHERES mini-satellites are not equipped with blasters or lasers, the SPHERES device is designed to be a testbed for trying out experimental software to control clusters of satellites; it should be easy to add them.

The next step in the official testing is to tuck additional SPHERES units onto shuttle flights to test formation flying. The second satellite is scheduled to launch to the station on STS-121 in July 2006. The third will be launched on STS-116.

See our earlier story about testing SPHERES aboard the KC-135 plane that achieves microgravity conditions by extreme flight manuevers - SPHERES - Mini Satellites Fly In Formation. Read NASA releases here and here. Check out the MIT SPHERES project page. Space.com also had a detailed early article. Thanks to alert reader Bryan Teoh for the tip on this story.

(This Science Fiction in the News story used with permission from Technovelgy.com - where science meets fiction.)