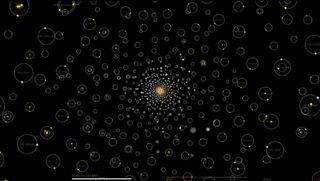 This still from a video by Tom Hands of the University of Leicester offers a glimpse into the speed of planets if every alien solar system known to date.
(Image: © Tom Hands)

A new video gives viewers a crash course in exoplanet science, comparing the speed of alien planets around other stars and the huge diversity of distant solar systems in just over a minute.

The 61-second video tour of alien planets — created by Ph.D. student Tom Hands of the University of Leicester in England — provides a flyby tour of all known planetary systems beyond Earth's sun known to orbit a single star.

"I wanted to demonstrate the vast range of different timescales on which exoplanets orbit their host stars, from things which orbit at many times the separation of the Earth and sun over many hundreds of years, right down to planets which orbit so close to their star that they complete each orbit in just a few hours," Hands said in a statement. [The Strangest Alien Planets]

"I find it fascinating just how much these exoplanetary systems differ from our own system in scale," he added. "I hope people will gain an understanding of the vast differences between systems from the video."

Hands produced the video using data collected in the Open Exoplanet Catalogue, which lists 1,776 confirmed exoplanets in 1,082 alien solar systems as of Tuesday (May 6).

The Open Exoplanet Catalogue is one of four main databases that keep track of alien worlds. The other three, and their current exoplanet tallies, are the Extrasolar Planets Encyclopaedia (1,786); the NASA Exoplanet Archive (1,703); and the Exoplanet Orbit Database (1,491). (The different numbers reported by each database reflect the uncertainties inherent in exoplanet detection and confirmation.)

Astronomers discovered the first exoplanet in 1992 and first spotted one orbiting a sunlike star in 1995. The pace of discovery has ramped up considerably in the last five years or so, thanks, in large part, to NASA's Kepler space telescope, which launched in March 2009.

Kepler's original planet-hunting mission came to an end in May 2013, when the second of the spacecraft's four orientation-maintaining reaction wheels failed, robbing Kepler of its precise pointing ability. But team members have proposed a new mission for Kepler called K2, which would allow the telescope to keep hunting for alien planets, albeit in a more limited fashion, and to observe a number of other cosmic objects.

While the new video provides a good introduction to the variety of known extrasolar systems, it does not depict any worlds that orbit two stars. Kepler was the first instrument to find such "Tatooine" planets, which have two suns in their skies like Luke Skywalker's home planet in the "Star Wars" films.