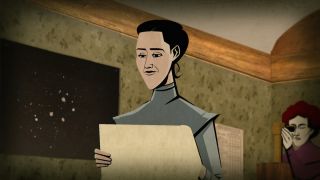 Host Neil deGrasse Tyson tells the story of 20th century Harvard University astronomer Henrietta Swan Leavitt and the team of Harvard University female astronomers who catalogued the stars in the all-new "The Sisters of The Sun" episode of Cosmos: A Spacetime Odyssey.
(Image: © FOX)

Dunst will provide the guest voice for an animated version of Cecilia Payne, a British astronomer who discovered the chemical composition of stars, proposing that thare largely made up of hydrogen. Matlin will lend her voice to Annie Jump Cannon, an American astronomer who developed the first catalogue the spectral characters of stars. Fox's "Cosmos: A Spacetime Odyssey," hosted by astrophysicist Neil DeGrasse Tyson, is a 21st-century incarnation of the 1980 TV series hosted by famed astronomer Carl Sagan.

Matlin, who is the only deaf performer to have received an Academy Award for Best Actress for her performance in "Children of a Lesser God," has collaborated with "Cosmos" producer Seth MacFarlane before; she provided the voice for a character named Stella on "Family Guy" (apparently after she approached MacFarlane about why she was not asked to provide her own voice for an animated version of herself on the show.)

"Sisters of the Sun" is the eighth episode in the 13-part "Cosmos" series, which launched in March. The show is a reboot of astronomer Carl Sagan's beloved series, "Cosmos: A Personal Voyage," which first aired on PBS in 1980.

While Sagan's classic show relied on live-action historical re-enactments to illustrate the history of science, the new series, hosted by astrophysicist Neil deGrasse Tyson, has drawn from a well of Hollywood talent with CGI graphics and animated sequences.

"Cosmos: A Spacetime Odyssey" airs Sunday (April 27) at 9 p.m. ET/PT on Fox. It will be rebroadcast on the National Geographic Channel on Monday (April 28) at 10 p.m. ET/PT. Check local listings.