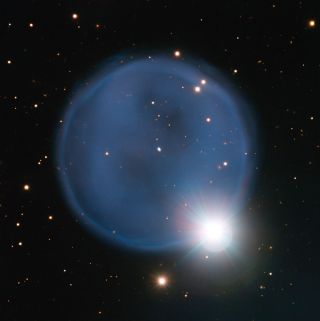 A powerful telescope in Chile has captured an image of a planetary nebula and a bright star that together look eerily similar to a diamond ring in deep space. The European Southern Observatory released the photo of the planetary nebula Abell 33 and the star called HD 83535 today (April 9). You can fly through the diamond ring nebula in a video on Space.com.

A planetary nebula, one of the last stages of life for a star like the sun, forms when a star with a mass similar to the sun's blows out its atmospheres into space, creating a glowing cloud of gas around the stellar remnant that will eventually become a white dwarf, ESO officials said in a statement. The circular appearance of Abell 33 is actually rare for a planetary nebula, ESO officials added. Usually, these kinds of objects have strange shapes due to the spin of the star or other factors. But somehow, Abell 33 looks like a perfect blue bubble. [Gallery: Strange Nebula Shapes, What Do You See?]

"The remnant of Abell 33's progenitor star, on its way to becoming a white dwarf, can be seen just slightly off-center inside the nebula, visible as a tiny white pearl. It is still bright — more luminous than our own sun — and emits enough ultraviolet radiation to make the bubble of expelled atmosphere glow," ESO officials said in a statement.

The star HD 83535 is located between Abel 33 and Earth. Its unique positioning allowed for the fortuitous alignment, creating the illusion of a celestial diamond ring.

In a second ESO image showing the sky surrounding the nebula and star, the cosmic ring looks like a small blue circle with faint galaxies visible in other parts of the photo. The bright orange star at the top of the wide image is called Iota Hydri, which observers can see with the naked eye, according to ESO.

ESO's Very Large Telescope captured the image of Abel 33 and HD 83535. Fifteen different countries support the European Southern Observatory, including Brazil, France, the United Kingdom, Denmark and Portugal. It is the most productive ground-based observatory in the world, ESO officials have said.

Guitarist Joe Satriani recorded the music used in the cosmic diamond-ring video on Space.com. The song is called "Is There Love in Space?" and you can pre-order Satriani's upcoming book, "Strange Beautiful Music: A Musical Memoir," on Amazon.com.