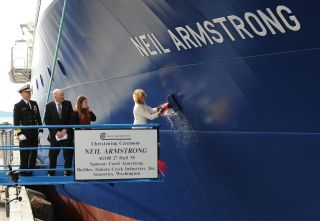 You could call it one small step for a ship, one giant leap for oceanographic research.

The U.S. Navy named the first of a new class of research vessels after the first man to walk on the moon, astronaut Neil Armstrong, during a ceremony Saturday (March 29) at the Port of Anacortes Transit Shed in Washington.

"[The christening] is a fitting tribute to a man whose work as a naval aviator and astronaut inspired generations of Americans to look beyond the horizon, to strive to achieve the seemingly impossible," Secretary of the Navy Ray Mabus said in a statement.

"This ceremony honors not only this great man, but the hundreds of people whose tireless efforts in constructing this ship led to this day, a day when the spirit of discovery and exploration is celebrated as it should be," he added.

The 238-foot-long (72.5-meter) ship, which is painted red, white and blue, took Dakota Creek Industries two years to build. The ship was launched on Feb. 20.

Mabus named R/V Neil Armstrong to honor the memory of the first moonwalker, who died in 2012. Armstrong served at NASA as an engineer, research test pilot, astronaut and administrator. He was also a naval aviator, flying nearly 80 combat missions during the Korean War.

According to the Navy, the Neil Armstrong-class research vessels are built based upon a commercial design and will support interdisciplinary oceanographic research in coastal and deep ocean areas.

The R/V Neil Armstrong, as the first in its class, is to be used for research in tropical and temperate oceans around the world. The ship will also serve an on-going need by the academic community for a general-purpose ship based on the East Coast of the United States.

"I can't think of a better name to go on the side of a ship designed for exploration and discovery," said Rear Adm. Matthew Klunder, Chief of Naval Research, at Saturday's naming ceremony. "R/V Neil Armstrong will play a pivotal role in teaching the Navy about the ocean so we can more effectively plan our operations around the world."

The R/V Neil Armstrong is outfitted with a modern suite of oceanographic equipment, including acoustics capable of mapping the deepest oceans and advanced over-the-side handling gear to deploy and retrieve scientific instruments. The ship's information technology tools support monitoring systems and communicating with land-based sites.

Modular onboard laboratories and extensive science cargo capacity provides the Neil Armstrong with the flexibility to meet a wide variety of oceanographic research challenges in the coming decades, the Navy said.

The R/V Neil Armstrong will be manned by a commercial crew and will be operated by Woods Hole Oceanographic Institution (WHOI) in Massachusetts under a contract with the U.S. government. Set to enter service in 2015, it will replace the soon-to-be-retired R/V Knorr, the research ship best known for supporting the 1985 discovery of the wreck of the RMS Titanic.

"Now the R/V Neil Armstrong will provide a continuum of exploration for the next 50 years," Carol Armstrong said.

"R/V Neil Armstrong will carry on its namesake's legacy of exploration, enabling the next generation of oceanographic science and discovery," Susan Avery, WHOI director and president, said in a statement.

The Neil Armstrong is the first US oceanographic research vessel named for a space explorer. The second ship of its class will also be named after a NASA astronaut, the late Sally Ride, who was the first American woman to fly into space. The R/V Sally Ride (AGOR 28), which is still under construction, will be operated by the Scripps Institution of Oceanography in San Diego.

In addition to the Ride and Armstrong, the Navy has four other ships named after U.S. astronauts. The USNS Alan Shepard, named for the first American to fly in space, was launched in 2006; the USNS Wally Schirra, named after the only pilot to fly Mercury, Gemini and Apollo capsules, was launched in 2009; and the USNS John Glenn, named for the first American to orbit the Earth, was christened in February.

Click through to collectSPACE to watch video of the christening of the R/V Neil Armstrong.