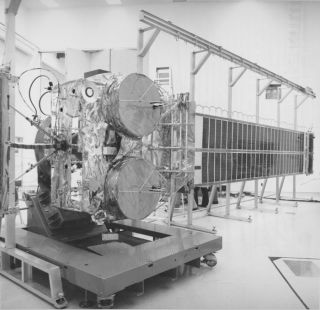 The Communication Technology Satellite, a high-powered spacecraft resulting from five years of cooperation between NASA and Canada's Department of Communications, was launched in January of 1976.
(Image: © NASA.)

In this historical photo from the U.S. space agency, the Communication Technology Satellite was launched from NASA's Kennedy Space Center, Florida, on January 17, 1976 and operated until October 1979. This high-powered spacecraft was the result of a five- year effort of international cooperation between NASA and Canada's Department of Communications.

Canada designed and built the spacecraft and NASA tested, launched, and operated the CTS. The Canadians later renamed the spacecraft after the mythical Greek messenger god, Hermes. The transmitter improved 10-20 times the broadcast power of typical communication satellites of the era. With more power transmitted by the satellite, it was possible to use smaller and cheaper ground stations thus paving the way for applications such as direct broadcast television. The CTS is the second satellite designed to transmit high-quality color television. The first was the Application Technology Satellite (ATS), which was launched December 17, 1966.