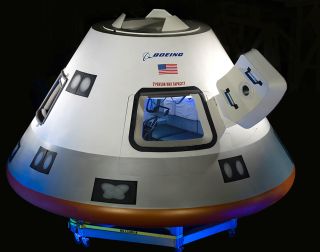 The United States should be able to launch its astronauts to space using homegrown commercial spacecraft by 2017, NASA officials say.

NASA requested $848 million for commercial crew in the White House's 2015 budget proposal. That figure is enough to keep competition going, the agency says, but historically Congress grants the agency less than it asks for.

Boeing is developing the CST-100 capsule, a vehicle that looks somewhat like an Apollo spacecraft and would launch on board an Atlas V built by United Launch Alliance. In December and January, the companies tested the CST-100's emergency detection system by putting the software through several emergency scenarios and seeing how the escape system behaved.

The CST-100's detection system will work together with the avionics systems on board Atlas V. Should an emergency occur, the CST-100 will fire escape thrusters to move the crew away from the rocket. Then, just like a commercial aircraft pilot shutting off the autopilot, an astronaut would take control of the spacecraft for a safe landing. Testing showed that it would be possible for a pilot to fly the CST-100 in this situation, NASA officials said.

Next, the spacecraft's primary structure design will be put through a critical design review to ready the spacecraft for manufacturing.

SNC, meanwhile, finished an incremental critical design review of its Dream Chaser spacecraft, a "lifting body" that looks like an airplane and would land on a runway like NASA's now-retired space shuttle fleet did.

The company also reviewed data from its first free-flight test in October 2013, which ended with the prototype skidding off the runway. The review, however, showed that the spacecraft is flying as designed and that it can do controlled descents and landings.

"By completing these important milestones, SNC is confident that our vehicle design is sound and that the spacecraft can successfully fly within established and expected flight boundaries," he added. "SNC is now advancing and upgrading the Dream Chaser test spacecraft in preparation for additional flight tests in 2014."

Next, SNC will look at information from wind-tunnel tests to see how the spacecraft is performing and make changes as needed to the design.

Blue Origin's New Shepard spacecraft is being readied for a review of its propellant tank assembly and a subsystem interim design. NASA is expected to perform tests on this later this year.

As a whole, NASA added, this year the CCP program will see contracts awarded for its fourth phase, called the Commercial Crew Transportation Capability (CctCap) contract or contracts. SNC, SpaceX and Boeing all received funding in 2012 in the third round of CCP, called Commercial Crew Integrated Capability (CCiCap).