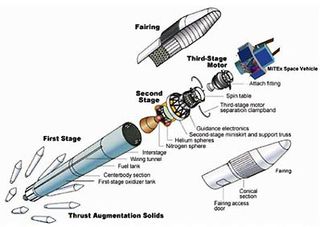 This illustration details the MiTEX satellites and their Delta 2 booster.
(Image: © Boeing/DARPA via Spaceflight Now.)

Anexperimental U.S. military project to test whether the advanced technologiesembedded in two miniature satellites and a new upper stage kick motor canoperate through the rigors of spaceflight will launch into orbit Wednesdayevening from Cape Canaveral aboard a Boeing Delta 2 rocket.

The 12-story rocket willroar away from pad A of Complex 17 with its main engine and six strap-onboosters firing to create 789,000 pounds of thrust. A minute later, the threeremaining solid-fuel boosters will light as the six ground-lit motors burn outand fall away.

Heading eastward across theAtlantic, the blue and white Delta will leave a smoky contrail from the solidboosters until the final three are extinguished just over two minutes intoflight and separate more than 30 miles above the ocean.

That will leave the RS-27Afirst stage engine, consuming refined kerosene and supercold liquid oxygen, topush the rocket onward for another two minutes to an altitude of 70 miles (112kilometers) before shutting down. The spent stage then jettisons, allowing thehypergolic-fueled second stage to ignite.

Moments later, thetwo-piece nose cone that shrouded the payload during ascent through theatmosphere is commanded to spring open and separate.

The second stage enginewill deliver the rocket into an initial orbit with a high point of 154 statutemiles (247 kilometers) and low point of 103 miles (165 kilometers) whenit shuts down at T+plus 10 minutes, 22 seconds after liftoff.

The vehicle will coast inthat orbit for 12 minutes before the engine is re-started for a 73-second burnto reach an intermediate orbit with a high point of 1,380 statute miles (2,220kilometers) and low point of 105 miles (168 kilometers). Tiny thrusters on theside of the rocket then spin up the third stage in preparation for separation.The two stages split at T+plus 23 minutes, 31 seconds, followed 37 secondslater by ignition of the solid-fuel third stage for its 86-second burn.

At T+plus 30 minutes and 24seconds while cruising 375 miles (603 kilometers) above south-central Africa,the third stage releases from the MiTEx upper stage with its still-attachedsatellites. That will complete the Delta 2 rocket's role in the MiTEx mission.

But before the twosatellites can begin their year-long missions, the stage has to place the craftinto the intended orbit.

Developed by the U.S. NavalResearch Laboratory, the experimental motor will put several new technologiesto the test including:

The stage will ferry thetwo MiTEx satellites from the egg-shaped geosynchronous transfer orbit reachedby the Delta 2 rocket to the circular geostationary orbit 22,300 miles (35,888kilometers) above the equator. That high orbit allows spacecraft to match theplanet's rotation and appear fixed over one location.

Once arriving ingeostationary orbit, the satellite pair will be deployed from the stage tobegin independent lives examining the value of operating miniature craft fromsuch a high vantage point above Earth. The demonstration will give militaryplanners real-life experience to draw upon when designing new projects.

The MiTEx spacecraft weighabout 500 pounds (226 kilograms) each. Orbital Sciences built one satellite andLockheed Martin the other.

"The satellites willconduct a variety of experiments in autonomous operations and maneuvering andstation-keeping. MiTEx will also demonstrate the ability to launch multiplesmall satellites into GEO orbit," according to DARPA officials.

Geostationary orbit is thehome to government and commercial communications satellites, plus spyspacecraft for eavesdropping reconnaissance missions and missile-launchdetection.

The price tag for MiTEx hasnot been released. And the exact parking spots in geostationary orbit for thetwo spacecraft aren't being revealed.