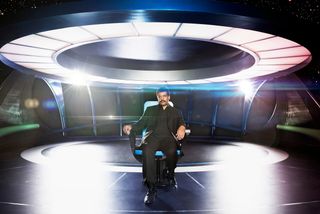 Astrophysicist Neil deGrasse Tyson hosts the new show "Cosmos: A Spacetime Odyssey" on FOX. He is seen here in his ship of the imagination.
(Image: © Patrick Eccelsine/FOX)

Even the president of the United States is into the new "Cosmos."

"America has always been a nation of fearless explorers who dream bigger and reach farther than others imagine," Obama said during his introduction. "That's the spirit of discovery that Carl Sagan captured in the original 'Cosmos.' Today, we're doing everything we can to bring that same sense of possibility to a new generation because there are new frontiers to explore and we need Americans eager to explore them. There are no limits. So, open your eyes, and open your imagination. [Carl Sagan's Astronomical Legacy in Photos]

The first episode of "Cosmos: A Spacetime Odyssey" kicked off the 13-episode season with a sweeping overview of the history of time as told using a "cosmic calendar." The show uses animation to bring scientific history to life. Sunday's episode paid homage to Sagan's unique brand of science education through subtle and overt references to the late astronomer's legacy. Neil deGrasse Tyson (the new host of "Cosmos") even explained that Sagan changed his life with a touching story at the end of the show about how they met.

"I already knew I wanted to be a scientist, but that afternoon, I learned from Carl the kind of person I wanted to become," Tyson said of his visit to Sagan's lab at Cornell University in upstate New York. "He reached out to me and to countless others, inspiring so many of us to study, teach and do science. Science is a cooperative enterprise spanning the generations."

Tyson was just in Washington D.C. with Obama for the first ever White House student film festival. Actor and Obama Administration employee Kal Penn, TV personality and CEO of the Planetary Society Bill Nye, and Tyson hosted the film festival at the White House.

The new "Cosmos" airs Sundays at 9 p.m. ET/PT on Fox. You can catch a replay of the premiere today (March 10) on National Geographic at 10 p.m. ET/PT.