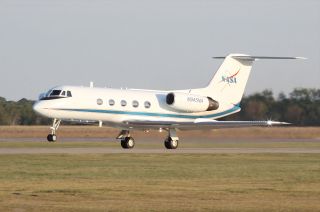 One of four business jets converted to train NASA astronauts to land the space shuttle is on final approach to the Alabama home of Space Camp, pending the result of the U.S. Space & Rocket Center's first crowd-funding campaign.

The Gulfstream II (GII) Shuttle Training Aircraft (STA) will serve as a "museum exhibition and immersive classroom" at the Huntsville tourist attraction. Currently on the ground at Birmingham-Shuttlesworth International Airport, all that stands between the STA and its installment in the center's Shuttle Park are the funds needed to prepare its display.

"The U.S. Space & Rocket Center Foundation, along with the help of some amazing Space Camp alumni, are aiming to raise $70,000 for this project, the total cost of which is $192,000," Trevor Daniels, spokesman for the effort, said in a video posted on the "Land the STA" Indiegogo page. "The $70,000 that is raised through this campaign will go to support site preparation and structural supports needed to bring the aircraft to our site." [Video: Training for Landing: Can Shuttle Really be Simulated?]

The fleet of four Shuttle Training Aircraft was a critical tool for training the astronauts who would land the shuttle. The orbiter, sometimes referred to as a "flying brick," returned from space as an unpowered glider and so had just one go at landing, with very little margin for error.

As such, shuttle commanders and pilots would normally fly around 1,000 approaches in the STA leading up to their mission. The aircraft was modified to perform in flight as the orbiter would on returning from space, including having half its cockpit replaced with the same controls as on the space shuttle's flight deck.

"The Gulfstream G-II was ... a business jet and it was a wonderful one at that," Jim Halsell, a five-time shuttle pilot and commander, said in a "Land the STA" project video. "But NASA took the airplane and completely gutted it of all the interior appointments that one would expect to have in a business transportation airplane."

"In the cabin we had instead a very large computer," he said. "That computer turned the airplane into a fly-by-wire test and training airplane that allowed it to fly exactly like the space shuttle."

"It's going to be a legacy that I hope a hundred years from now kids come in and look at it and say, 'Gee, that's how they trained,'" Hoot Gibson, a five-time space shuttle pilot and commander, said.

The U.S. Space & Rocket Center has a two-part plan for displaying the Shuttle Training Aircraft.

The first phase for the STA's exhibit includes installing the aircraft, building a mock runway leading up to the display, raising a canopy to protect the vehicle from the elements and adding a staircase that will allow the public to explore the interior of the aircraft.

"The U.S. Space & Rocket Center plans to exhibit the G-II in Shuttle Park, along with our full shuttle stack featuring the Pathfinder orbiter and our recently acquired T-38 [jet]," Daniels explained. "These three vehicles represent a kind of 'shuttle trifecta,' where the T-38 and G-II were used by astronauts to train for flying the orbiter."

The exhibit's second phase calls for an amphitheater to be built underneath the STA's wingspan.

"This will be an iconic venue for educational presentations and demonstrations, Space Camp and Aviation Challenge graduations and special events," project officials wrote on the Indiegogo website.

To learn more or to donate to the campaign, see the "Land the Shuttle Training Aircraft" website at: www.rocketcenter.com/sta