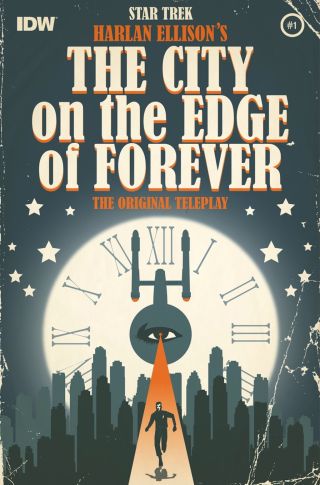 Harlan Ellison is well-known in science fiction circles — in fact, considered a modern master of science fiction, and one of his most critically acclaimed stories came from the "Star Trek: The Original Series" episode "City on the Edge of Forever." Now, fans will get the chance to experience his original, uncut teleplay for the episode, thanks to an adaptation by IDW Publishing.

The comic book mini-series "Star Trek: The City on the Edge of Forever" will kick off in June 2014, and is adapted directly from the original teleplay by Ellison, and under his direction, a press release announced. "Star Trek" comic book veterans Scott Tipton and David Tipton will write the adaptation, and J.K. Woodward, who has also done "Star Trek" comics for IDW, will provide fully painted interior art. Juan Ortiz will do covers for the series, coming off his book "Star Trek: The Art of Juan Ortiz" where he made interpretations of every episode of "Star Trek: The Original Series."

IDW’s Editor-in-Chief and CCO Chris Ryall will edit the series himself, saying that this was "a goal of ours since IDW first began publishing 'Star Trek' comics in 2007." Ryall went on to praise the original story, saying, "The episode justifies its position atop 'best 'Star Trek' episodes' lists but even it ain't nuthin' compared to what Ellison did in his original teleplay. This is truly going to be a 'Star Trek' adventure unlike any other, even to fans who have that beloved episode memorized." [See the amazing "Star Trek" art of Juan Ortiz]

Ellison, likewise, is excited to see the series come to life. "It was a superlative joy of my long life to have worked with Leonard Nimoy, who became my friend, and many others at 'Star Trek;' and an equally heart-happy joy to be working with J.K. and the Tipton Bros. and Chris Ryall on this long-awaited visual of my (humbly, I say it) brilliant original 'City…'"

"Star Trek: The City on the Edge of Forever" will be five issues, with the first debuting in June 2014.