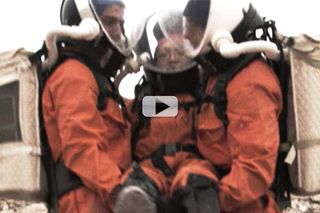 Julien Harrod is the editor for Human Spaceflight for EJR-Quartz. This article was adapted by Kai Staats from one that appeared on the European Space Agency blog Chronicles from Concordia. Harrod contributed this article to Space.com's Expert Voices: Op-Ed & Insights.

It sounds like something from a science-fiction survival film: A colleague on a Martian outpost breaks a leg during an extra-vehicular activity (EVA), but not far from base. Brought back safely, the colleague is unconscious and losing blood. To make matters worse, the immediate crew includes someone trained in foundational medical practices, but to reset the bone and properly close the wound, this team needs guidance.

Recently, the MarsCrew134 Analogue Astronaut Expedition simulated a mission to Mars over the course of two weeks at the Mars Desert Research Station (MDRS) in the Utah desert. Dr. Susan Jewell, MarsCrew134 Medical Officer and founder of the International Space Surgery Consortium, led an experiment to play out the above emergency medical scenario.

The scenario began outdoors with a crew member down. Jewell conducted a spinal assessment, as best as possible given the limitations of the suit. Two additional crew members brought the "injured" colleague back to a make-shift operating table on base. A dummy used in hospital training acted as the Marsonaut in need of aid while Jewell and team scientist Vibha Srivastava prepared to perform surgery with minimal, prior training.

To help and guide the MarsCrew134 team, they called for help: Doctors on "Earth" (Matthieu Komorowski in Lille, France, the medical officer of MarsCrew133) and "Mars" (the European Space Agency (ESA) Concordia research team in Antarctica) joined the operation remotely. The goal of the experiment was to determine if minimally trained crew personnel could perform anesthesia, and even an operation, in an emergency.

Doctors stationed at the ESA Concordia research station in Antarctica simulated another human outpost on Mars, with nearly real-time communication. As signals between Earth and Mars take between a half dozen and twenty-two minutes to propagate, one-way, "The patient has stopped breathing! What should I do?" would likely result in the patient dying before the reply was received.

In this particular scenario, a Skype session invoked a 3- to 5-second delay in video and audio, due to the latency of the satellite feeds on both ends. This relatively minimal delay, combined with poor visual quality and intermittent sound was ample to invoke many of the issues imposed by Earth-to-Mars communication. It was not easy!

Once the operation was underway, a computer software system simulated the patient's vital signs based on real-life data correlated to that particular kind of injury. The prospects did not look good: The patient had lost one liter of blood and was in shock. In this case, it was vital to anesthetize and treat the wound. Blood pressure was 57/38, heart rate was 127 beats per minute, respiration was 24 breaths per minute, and oxygen saturation was 94 percent.

Once the IV was in place, Komorowski instructed the fluid to be administered at the highest setting. Oxygen was given through a face mask. Komorowski described getting the intubation tube into place with Concordia stepping in to give advice. The procedure was delayed by a tube getting lost in the hectic action, but with Komorowski's approval, Jewell and Srivastava improvised and found a way to make the situation work.

Jewell and Srivastava got the job done, and the patient survived. Drugs administered brought the patient back to consciousness and the eyes opened and responded to basic input, such as the squeezing of hands. The patient was anesthetized and conscious!

To treat the wound, Concordia base doctors Tindari Ceraolo and Adrianos Golemis took over, leading their colleagues on Mars. The two sites were using a satellite feed for the telesurgery — video was blurry and unreliable. To compensate for the difficult circumstances, Jewell described in detail what the MDRS crew was seeing and doing.

ESA-sponsored medical doctor in Antarctica, Adrianos Golemis, instructed Jewell to clean the wound while Komorowski monitored the vital signs from France. From needle size to insertion angle, Golemis directed the MarsCrew134 how to sterilize, clean and sew up the wound and protect it with gauze.

The operation was over in less than an hour, and most importantly the simulated "patient" survived to see another Martian sunrise.

Srivastava had been helping Jewell throughout the procedure on-site at the MarsCrew134 habitat, and as a crew scientist without a medical background she found it difficult to follow some of the technical instructions such as 'auscultate chest.' Future experiments might benefit from labeling equipment so crew members can find what is needed more quickly. Reaching for tools was a struggle and coordination was difficult. Without prior training, such things are unavoidable.

During the debriefing, Jewell remarked, "Finding the challenges and working out how to solve them s what all this is about." Similar, future endeavors are in development by the International Space Surgery Consortium.

This article is adapted from one that appeared on the European Space Agency blog Chronicles from Concordia. The views expressed are those of the author and do not necessarily reflect the views of the publisher. This version of the article was originally published on Space.com.