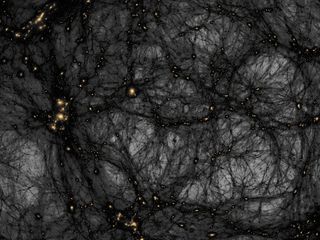 Dark matter is an invisible material that emits or absorbs no light but betrays its presence by interacting gravitationally with visible matter. This image from Dark Universe shows the distribution of dark matter in the universe, as simulated with a novel, high-resolution algorithm at the Kavli Institute of Particle Astrophysics & Cosmology at Stanford University and SLAC National Accelerator Laboratory.
(Image: © © AMNH)

China is entering the race to detect mysterious dark matter in a big way, with a huge facility in Sichuan province set to begin collecting data in the coming weeks.

The $8 million PandaX (Particle and Astrophysical Xenon) experiment — which lies 7,874 feet (2,400 meters) underground, inside a mountain made of marble — will be up and running early this year, IEEE Spectrum reported recently on Discovery News. When it comes online, PandaX will join the world's other subterranean dark-matter experiments, such as the XENON project in Italy and the Large Underground Xenon (LUX) effort in South Dakota.

These experiments work on the same principle. They're looking for particles emitted when weakly interacting massive particles (WIMPS) — the postulated major component of dark matter, which is thought to make up more than 80 percent of all matter in the universe — collide with the nuclei of "normal" atoms inside a big tank of liquid xenon. PandaX and the other projects need to be underground, where they're shielded from most of the cosmic radiation that could generate similar signals.

The first science results are expected from PandaX by the end of the year, IEEE Spectrum reported. If everything works as planned, the project may be scaled up, employing a bigger tank of xenon to increase the chances of detection.