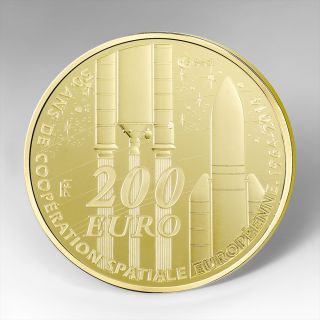 A new collectible set of gold and silver coins has been minted in France to celebrate the past half century of European cooperation in space.

The Monnaie de Paris, France's national mint, has issued the "50 Years of European Space Cooperation" collection in time for the 50th anniversary of the founding of the two organizations that led to today's European Space Agency (ESA).

The commemorative euros are part of the French Ministry of Finance's "Europa" coin series, which since 2002 has paid tribute annually to different individuals or events that have factored into European cooperation and construction.

"Wishing this year to pay tribute to Europe's successes in space, the Monnaie de Paris naturally turned to ESA," the European Space Agency described in a statement posted to its website. "The two organizations have been working together since September 2013 on this project now seeing the light of day, which is certain to delight collectors and space enthusiasts alike."

The obverse of the coins features Arianespace's Ariane 5 rocket, which ESA regards as "the best-known and most popular symbol of this historic cooperation."

The launch vehicle on the coins is depicted before liftoff and in flight, with ellipses in the design's background used to represent the orbits of the many satellites deployed by the Ariane.

Among the booster's more high-profile payloads has been ESA's supply craft for the International Space Station, the Automated Transfer Vehicle; the Herschel orbiting space observatory; and the Rosetta comet-chasing probe. The Ariane 5 is also scheduled to launch the James Webb Space Telescope in 2018.

The coins' reverse side features the goddess Europa, her hair strewn with stars, and draped in 12 flags — some on their poles on the coin's left. The 12 euro symbols around the goddess' head are intended to symbolize the 12 stars of the European flag.

The Monnaie de Paris has minted the coins in a choice of four denominations, all with the same design. The 200, 50 and 5 euro coins are created with one ounce, one quarter ounce and one half of a gram of gold, respectively. The 10 euro coin is offered as a silver proof. The coins are limited edition, ranging from a mintage of 500 to 10,000.

The gold and silver coins celebrate "50 years of European space cooperation and the Ariane rocket, which remains one of Europe's greatest achievements," officials with the Monnaie de Paris wrote on the mint's website. "[ESA] has been coordinating space projects jointly pursued by 20 European countries for the last 50 years. It is one of the best examples of scientific and technological cooperation at a European level."

Click through to collectSPACE.com for more images and details on how to order the "50 Years of European Space Cooperation" coin collection.