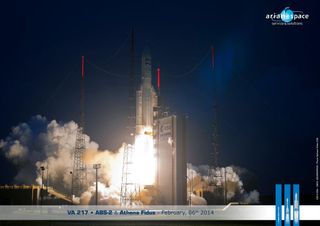 An Arianespace Ariane 5 rocket launches toward space carrying the ABS-2 telecommunications satellite for Asia Broadcast Satellite and the defense satellite Athena-Fidus for France and Italy. Liftoff occurred on Feb. 6, 2014 from the Spaceport in Kourou, French Guiana in South America.
(Image: © Arianespace)

The fiery evening liftoff from the frontier of the Amazon jungle began a half-hour ascent, with the Ariane 5's twin solid rocket boosters expending more than a million pounds of pre-packed powder propellant, and the launcher's hydrogen-fueled first and second stages thrusting toward an orbit reaching as high as 22,330 miles above Earth.

The launch occurred at 2130 GMT (4:30 p.m. EST), one hour later than planned as ground teams waited for stormy weather to pass over the space base in Kourou, French Guiana. [Amazing Rocket Launches of 2014 (Photos)]

The delay broke a nearly three-year streak without any countdown holds after the launch team had fueled an Ariane 5 rocket.

Stephàne Israël, Arianespace's chairman and CEO, hailed the launch as a success in remarks to VIPs inside the Guiana Space Center's Jupiter control center.

The flight marked the 58th consecutive success for the Ariane 5 rocket dating back to 2003.

The 166-foot-tall launcher raced through clouds hanging over the French Guiana space center, quickly disappearing from the views of spectators on the ground.

But one observer with a uniquely high vantage point, NASA astronaut Rick Mastracchio, saw the rocket streak into orbit from the International Space Station. Mastracchio posted a photo of the launch on his Twitter account.

"My satisfaction is all the greater that tonight's mission is the very symbol of Arianespace's dual raison d'être," Israël said. "Arianespace provides Europe with a guaranteed and independent access to space, while at the same time it delivers high-quality launch services to commercial satellite operators worldwide."

At the top of the tandem payload stack for Thursday's launch was the 13,955-pound ABS 2 spacecraft for Hong Kong-based Asia Broadcast Satellite. Built by Space Systems/Loral of Palo Alto, Calif., the powerful telecom platform will beam direct-to-home television, multimedia and data transmission services across the Eastern Hemisphere, reaching a geographic swath from Europe and Africa, across the Middle East, Russia and India, to Southeast Asia and China. [Spaceflight Now Photos: Ariane 5 Rocket Rolls Out to Launch Pad]

The commercial ABS 2 satellite is starting a 15-year operational lifetime, but the first leg of the mission will be to boost itself into a circular geosynchronous orbit 22,300 miles high. The craft will appear parked over a fixed location along the equator at 75 degrees east longitude.

ABS 2 is equipped with 89 transponders in Ku-band, C-band and Ka-band.

According to Asia Broadcast Satellite, the spacecraft has 10 beams, with six dedicated to Ku-band television transmissions throughout the Eastern Hemisphere. C-band beams will focus on Africa and Southeast Asia to boost connectivity there, and a single Ka-band beam will serve commercial and military users over the Middle East and North Africa.

While other indigenous and NATO military satellites offer the French and Italian governments ultra-secure, jam-resistant communications links, the purpose of Athena-Fidus is to provide broadband services beyond the telephone, fax and Intranet capabilities of the Syracuse and Sicral networks. Focusing on non-strategic communications for users like fire brigades, national police and homeland security officials, Athena-Fidus will support more modern services such as high-speed Internet and video conferencing.

"The launch of Athena-Fidus, followed at the end of the year by Sicral 2, is the culmination of the first concrete collaboration in Europe, between Italy and France, for a military and dual space telecom program," said Bertrand Maureau, vice president for telecommunications at Thales Alenia Space, contractor for the Athena-Fidus project along with Telespazio. "This new and highly innovative satellite will naturally pave the way for government broadband contracts. We hope that Thales Alenia Space will be able to offer its experience and expertise to other government customers, whether for its proven dual technology solutions, or to support the development of new partnerships."

Featuring EHF and Ka-band transponders, Athena-Fidus will be joined by Sicral 2, another Franco-Italian military communications satellite, scheduled for launch aboard another Ariane 5 rocket in late 2014.

The next Ariane 5 launch is scheduled for March 7 with another flight with a pair of communications satellite. Next time the Ariane launcher will haul up the ASTRA 5B and Amazonas 4A telecom birds.