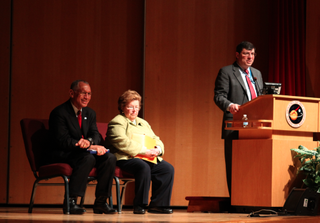 GREENBELT, MD. — The $8.8 billion James Webb Space Telescope, now in what is expected to be the most expensive year of its protracted development, could find itself back in trouble if Congress cannot keep the money coming, NASA Administrator Charles Bolden and Sen. Barbara Mikulski (D-Md.) said here Feb. 3.

JWST, a flagship astrophysics mission, is expected to launch in 2018 on a five-year primary mission to observe the infrared universe from a gravitationally stable perch 1.6 million kilometers from Earth. Congress last month approved $658.2 million for the project for 2014. Before JWST entered development, around the turn of the century, program officials projected it would cost $1 billion to $3.5 billion and launch between 2007 to 2011, according to a Government Accountability Office report released Jan. 8.

Now, after lengthy delays and billions in added costs, JWST is entering its peak development years, in which major subsystems will be put together, tested, integrated with one another, and tested again. It will be, according to Bolden, one of the most difficult parts of JWST’s construction. [Photos: Building the James Webb Space Telescope]

“This is our tough budget year,” Bolden said. It is also the most expensive, according to projections the White House released last April with its 2014 budget proposal.

Bolden spoke to the press here after he and Mikulski, JWST’s biggest ally in Congress, held a town hall meeting at Goddard, the center in charge of building the massive infrared observatory. Both NASA employees and executives from some of JWST’s major industry contractors attended.

Mikulski told reporters that automatic budget cuts known as sequestration, which reduced NASA’s 2013 appropriation to about $16.9 billion, “resulted in furloughs, shutdowns, slowdowns [and] slamdown politics [which] are exactly what could derail or cause enormous cost overruns to the James Webb.”

The chairwoman of the Senate Appropriations Committee, and its commerce, justice, science subcommittee, said at the town hall that “we would not have been able to do what we needed to do” on JWST if NASA’s 2014 budget had remained at the sequestered 2013 level of $16.9 billion.

However, JWST, a favorite project of Mikulski’s, got exactly what the White House requested for 2013: $627.6 million, sequestration notwithstanding.

However, if lawmakers cannot find a long-term alternative to sequestration, a 10-year budget-cutting mechanism created by the Budget Control Act of 2011, NASA may be forced again to take money from other agency missions to keep JWST whole. NASA’s Planetary Science Division has been the telescope’s primary billpayer so far. [How the James Webb Space Telescope Works (Infographic)]

Assuming JWST is funded at the levels laid out in the 2014 budget request, the project still has 13 months of reserve funding left, Eric Smith, JWST’s deputy program manager, said here in an interview Feb. 2. JWST had 14 months of reserve funding in 2013, but roughly one month was eaten up by the partial government shutdown in October, Smith said.

Among the activities scheduled for this year is a cryogenic environment test of the telescopes four main science instruments. It will be the first time the Fine Guidance Sensor, Mid-Infrared Instrument, Near Infrared Spectrograph and Near Infrared Camera have been in Goddard’s thermal vacuum chamber together.

All four of those instruments are at Goddard now, but only the Fine Guidance Sensor and the Mid-Infrared Instrument made it into the first round of cryogenic testing, which began back in August and continued through November. A skeleton crew remained at Goddard through the shutdown to keep the instruments at cryogenic temperatures.

In the test scheduled for June or July, the Near Infrared Spectrograph provided by the European Space Agency and the Near Infrared Camera built by Lockheed Martin Space Systems will be bolted on to JWST’s main instrument housing and subjected to cryogenic temperatures as part of the Goddard-led Integrated Science Instrument Module for the first time, Smith said.

Possibly joining the four instruments for the June test is the flight version of one half of the technically troubled cryogenic cooler for the Mid-Infrared Instrument, which is being reworked by a subcontractor to Northrop Grumman, the Redondo Beach, Calif.-based prime contractor for the JWST spacecraft, including its deployable 6.5-meter primary mirror, backplane support structure and tennis court-sized sunshield.

The cryocooler, required to keep the instrument at its operational temperature of about negative 255 degrees Celsius, comprises two halves, Smith said. The so-called “warm” half, which has also given Northrop a headache, is not needed for testing until 2016. Northrop had to fix a weld with that half of the cryogenic cooler even as its subcontractor, ValveTech of Phelps, NY., worked to fix leaky cryogenic valves in what Smith called the “cold” half of the cooler.

“We believe we now have some valves that meet the specification, but they need to go through more testing,” Smith told SpaceNews.

If ValveTech’s redesigned valves don’t pass muster, “we’re also looking at another manufacturer that could be a backup,” Smith said.

If the flight version of the cryogenic cooler’s cold half is not delivered to Goddard in time for the June test, JWST’s Integrated Science Instrument Module will go into the Goddard cryo chamber with an engineering test article of the cooler, as it did last year test, Smith said.