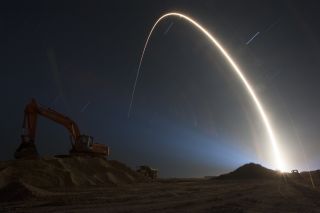 A rocket carrying NASA's latest high-tech relay satellite streaks into orbit from a launch pad in Florida in an amazing image captured by a space agency photographer.

The first of the third-generation satellites, TDRS-K, launched on Jan. 30, 2013, and TDRS fleet accepted it in mid-August. NASA plans to launch TDRS-M in 2015.