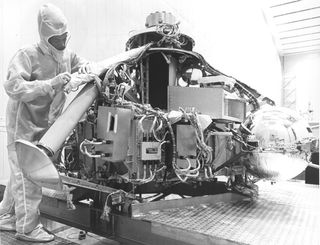 Viking, the planetary landing spacecraft, is under assembly in 1974 for its 1976 mission to Mars.
(Image: © NASA.)

In this historical photo from the U.S. space agency, the planetary landing spacecraft Viking, which includes stereo cameras, a weather station, an automated stereo analysis laboratory and a biology instrument that can detect life, is under assembly in May of 1974 at Martin Marietta Aerospace near Denver, Colorado.

This Viking spacecraft will travel more than 460 million miles from Earth to a soft landing on Mars in 1976 to explore the surface and atmosphere of the red planet. Martin Marietta is prime and integration contractor for the Viking mission to NASA's Langley Research Center, Hampton, Virginia. The lander will be powered by two nuclear generators.