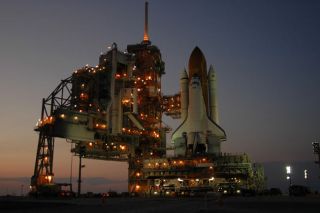 Amid the glow of lights from the fixed and rotating service structures, Space Shuttle Discovery rests on the hardstand of Launch Pad 39B at NASA's Kennedy Space Center after completing the 4.2-mile journey from the Vehicle Assembly Building.
(Image: © NASA/Ken Thornsley.)

Major changes to the space shuttle Discovery's external fuel tank do not pose an unacceptable risk to NASA's planned July 1 launch, though some concerns do remain, the space agency said Wednesday.

NASA's work to reduce the amount of large - and potentially dangerous - pieces of foam insulation that could pop free from Discovery's fuel tank and strike the orbiter during flight appears to have paid off, shuttle program manager Wayne Hale told reporters.

"We believe we have made significant improvements since last year in the elimination of many of the hazards from foam," Hale said during a press conference at NASA's Kennedy Space Center spaceport in Cape Canaveral, Florida. "There will continue to be foam coming off the external tank...what we have done in a very systematic matter is eliminated the largest hazards."

Hale's remarks came after he and about 100 engineers from various NASA centers across the country completed a debris verification review of Discovery's external tank changes. A structural review of the orbiter's fuel tank modifications - which features the removal of a 34-pound (15-kilogram) foam protuberance air load (PAL) ramp - is slated for next week.

Discovery's STS-121 mission will mark NASA's second shuttle flight since the 2003 loss of the Columbia orbiter and its STS-107 astronaut crew. Columbia suffered heat shield damage from errant tank foam at launch, leading the orbiter's destruction as it reentered the Earth's atmosphere.

A similar foam shedding event was observed during the first post-Columbia shuttle mission — STS-114 also aboard Discovery — but the debris did not strike the orbiter. The event, however, was a haunting reminder that foam shedding will be an ongoing challenge for NASA, and shuttle engineers have already earmarked 34 foam-covered brackets — known as ice frost ramps — on fuel tank exteriors for future work.

"We need to fly this vehicle to make sure that we made the first change right," Hale said, stressing that the foam ramp removal is the largest structural change to the shuttle launch system since its first flight. "Then we can go and address subsequent changes."

External tank foam shedding has been a major concern for NASA since the Columbia accident. The need to review and address tank foam debris after the STS-114 launch last July added to the STS-121 mission's delay.

Unlike the STS-107 and STS-114 launches, where the largest chunks of foam debris weighed 1.6 pounds (0.7 kilograms) and one pound (0.4 kilograms) respectively, Discovery's current fuel tank is expected to shed pieces of less than one-tenth of a pound, Hale said.

"I don't expect to see any one-pound pieces of foam coming off," he added.

But some foam will likely pop free from the ice frost ramps, and are a concern because they could strike the heat-resistant tiles along Discovery's belly that are vital for reentry. Ice frost ramps cover brackets that connect a tray of pressurization lines to a shuttle fuel tank's hull.

In a worst case scenario, in which foam falls from an ice frost ramp with just the right size, speed and at the precise time to cause maximum damage, it could cause "critical damage" to an orbiter, Hale said last month.

In the past, foam pieces as large as 0.09 pounds (1.44 ounces) have been seen falling from ice frost ramps, but wind tunnel and other tests by engineers suggest larger pieces of up to 0.2 pounds (or 3.2 ounces) could shake loose during flight, he added Wednesday.

"We are working our way down the list of potential debris sources to smaller and smaller releases," Hale said.

NASA officials said Discovery's STS-121 tank, as well as the one to fuel the STS-115 launch aboard Atlantis later this year, will not sport ice frost ramp fixes - largely because a good design is not yet available.

Whether an intermediate fix is applied to the third of fourth fuel tank to fly is still unknown, but a final solution - which may call for new titanium brackets - could be in place eight shuttle flights down the line, Hale added.

The orbiter rolled out to KSC's Launch pad 39B on May 19, where work crews later loaded the Italian-built Leonardo supply module and other cargo into the shuttle's payload bay.

"I don't really see it as an issue for us," Leinbach said, adding that the glitch is relatively minor. "We've got the best in the world working on it."

Shuttle workers plan to start loading the hypergolic fuel and oxidizer to feed Discovery's orbital thrusters on Thursday and Friday, he added.