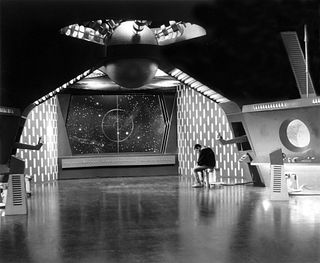 NEW YORK -- The floor of a Manhattan museum takes on a sci-fi feel as the interior of a fictional spaceship as part of a new art exhibit launching today (Jan. 22).

The simulated spaceship forms part of the "Museum as Hub: Report on the Construction of a Spaceship Module" exhibit at the New Museum here, and is made up of images of space shuttles taken from Eastern European science fiction movies dating back to the Cold War era. The exhibit as a whole explores the ideological role that outer space played during that time period in socialist Europe, New Museum representatives said in a statement.

"We hope for the exhibition to make the facts of time relativity, cultural translation, and spatial distance not only explained by curatorial conventions (texts, wall labels) but also performed by the visitors as they move inside the space and experience it as explorers, interested and disoriented by the new terrain they’re discovering," representatives with tranzit, the international network of contemporary art initiatives presenting the show, said in a statement. [Visions of Interstellar Starship Travel (Photos)]

In all, 117 pieces of art are included in the New Museum exhibit. They include sculptures, videos and print will be on display inside and around the spaceship, officials said. Artists from around the world including Vienna, Prague, Budapest, Bucharest, and Bratislava contributed to the presentation, museum officials said.

This weekend, the New Museum is hosting a two-day conference in honor of the new exhibition. On Saturday (Jan. 25), two panels of experts will discuss Eastern European science fiction and the current and future state of Eastern European art. On Sunday, the New Museum is hosting a movie marathon featuring three science fiction films from 1924, 1952 and 1963.

According to a description provided by the New Museum, the featured movies are:

"Museum as Hub: Report on the Construction of a Spaceship Module" will be on view at the New Museum from Jan. 22 to April 6, 2014. Find out more here: http://www.newmuseum.org/calendar/view/future-of-eastern-europe-conference-part-1