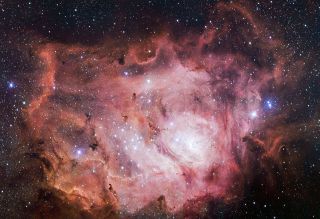 A pink lagoon glows in the Milky Way. New photos taken by a telescope in Chile put the Lagoon Nebula — a giant cloud of gas and dust located 5,000 light-years from Earth — on rosy display.

The Lagoon Nebula (also called Messier 8) is about 100 light-years across and harbors young stars that shine brightly in the image, according to European Southern Observatory officials. The VLT Survey Telescope in Chile captured the picture, taken as part of a sweeping set of surveys designed to unlock mysteries of the universe. You can watch a video flythrough of the new Lagoon Nebula image from ESO, based on the new VLT telescope images.

"The surveys are addressing many important questions in modern astronomy," ESO officials said in a statement. "These include the nature of dark energy, searching for brilliant quasars in the early universe, probing the structure of the Milky Way and looking for unusual and hidden objects, studying the neighboring Magellanic Clouds in great detail, and many other topics. [See Spectacular Photos of Nebulas in Deep Space]

"History shows that surveys often find things that are unexpected and these surprises are crucial for the progress of astronomical research," ESO officials added.

The Lagoon Nebula gets its name from a lagoon-shaped dust trail that winds through the glowing gas, and this isn't the first time ESO has imaged it. The observatory's Visible and Infrared Survey Telescope for Astronomy captured the nebula in stunning detail in infrared light, giving the cosmic wonder a different kind of glow.

ESO has also imaged the Lagoon Nebula before, looking at it in infrared light with its Visible and Infrared Survey Telescope for Astronomy in Chile.

The new images are part of one survey, yet there currently 11 public sky surveys in process using ESO telescopes. ESO officials have also released a zoomable version of the huge Lagoon Nebula image here: http://www.eso.org/public/images/eso1403a/zoomable/

ESO is operated by 15 different countries and is the most productive ground-based astronomical observatory in the world, according to ESO officials.