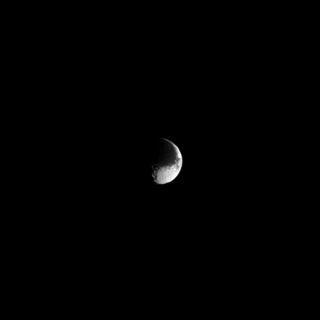 Call it cosmic zen. Yin and yang appear to meet on one of Saturn's moons in a photo taken by a spacecraft exploring the ringed planet and its many moons.

The new Cassini photo of Saturn's moon Iapetus shows the satellite's dark and light sides as comma-shaped features that bear a striking resemblance to the yin and yang symbol in Chinese philosophy. The image was released in December, but actually taken by the Cassini spacecraft in August.

"This view looks toward the Saturn-facing hemisphere of Iapetus," NASA officials wrote in an image description. "North on Iapetus is up and rotated 30 degrees to the right. The image was taken in visible light with the Cassini spacecraft narrow-angle camera on Aug. 30, 2013." [Photos: The Rings and Moons of Saturn in Pictures]

Some scientists think that the two faces of Iapetus probably get their distinct appearances from the moon's slow rotation, meaning that the dark surfaces of the moon absorb more heat and have time to warm. Any icy materials that mix with the hotter surfaces turn gaseous and then fall back into the cooler regions, meaning that the dark side gets darker while the bright side becomes brighter.

Giovanni Cassini first spotted Iapetus in 1672. The odd moon is shaped somewhat like a walnut, with a huge ridge running along its equator. It's likely that the ridge was created when a giant impact flung chunks of Iapetus out into space at the end of its planetary growth more than 4.5 billion years ago.

The debris may have re-formed around the moon, creating a new moon orbiting Iapetus. Eventually, Iapetus' gravity tore its moon apart and the rubble rained down, creating the moon's distinctive ridge.

It's also possible that the ridge formed early in the moon's history when it was spinning more quickly than it does now.

The Cassini spacecraft launched in 1997 and made it into orbit around Saturn in 2004. The spacecraft is expected to continue studying Saturn and its moons until 2017, after which it will burn up in Saturn's atmosphere.