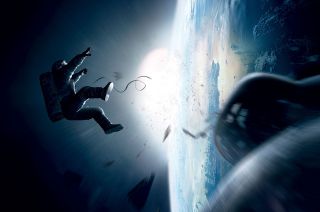 "Gravity" will be a force to be reckoned with at the 2014 Academy Awards.

The space thriller garnered 10 nominations for this year's Oscars, tying with "American Hustle" for the most nods. Among its other nominations announced today (Jan. 16), "Gravity" is up for best picture; Sandra Bullock is nominated in the lead actress category; and the movie's director Alfonso Cuarón is up for best director.

"Gravity" — the fictional story of two astronauts fighting to survive after a spacewalk goes horribly wrong — took in about $55.6 million its first weekend. To date, the movie has raked in $670 million worldwide, and it is set to re-launch into more than 900 movie theaters Friday (Jan. 17) to give fans a chance to see the movie on the big screen again or for the first time. [See photos from the film "Gravity"]

"We are thrilled by the many accolades for 'Gravity,' which have generated renewed word-of-mouth and interest in seeing the film, whether for the first time or to experience it again," Dan Fellman of Warner Bros. said in a statement on Jan. 13. "We wanted to give audiences everywhere another opportunity to see it the way it was meant to be seen — on the big screen."

It took nearly five years to bring the film to life, including developing a new way to shoot and light his sets to create the illusion of microgravity.

Cuarón used some real astronaut advisors to give "Gravity" even more of a sense of reality. Bullock spoke with NASA's Cady Coleman while the astronaut was in the middle of a stay on the International Space Station. The actress reached out to Coleman for advice about what it's like to live in space.

"We did not share any secrets, personal or professional. I don't know if I have any," Coleman told collectSPACE.com editor Robert Pearlman in September. "It was just a genuine exchange of information. She asked really good questions. I came out of it thinking 'I am really glad that this woman is making a movie about what it is like to live in space.'"

Tom Jones, an astronaut that saw the film, thought the movie's 3D elements gave audiences a good taste of what it is like to float in the vacuum of space.

"Scenes in this movie are so beautiful and sometimes very peaceful that it does remind me of some of the dreams I've had or some of the experiences I've had floating and looking out the window at night on the dark side of the planet," Jones told SPACE.com in October. "It's very evocative of the real space experience."

Along with nominations for lead actress, best movie and best directing, "Gravity" is up for awards in cinematography, film editing, original musical score, sound editing and other categories. See a  full list of Oscar nominees here: http://oscar.go.com/nominees