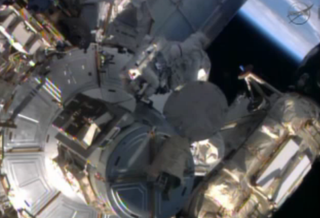 NASA astronauts Mike Hopkins and Rick Mastracchio ventured outside of the space station's Quest airlock today (Dec. 21) to begin the repairs. The spacewalk officially began at 7:01 a.m. EST (1200 GMT) when the two astronauts took their spacesuits to internal power. NASA TV will broadcast the entire 6.5-hour EVA (extra-vehicular activity or spacewalk), and you can watch the spacewalk live on SPACE.com.

"It's a beautiful day," one of the astronauts said as he stepped outside of the orbiting outpost.

Mastracchio and Hopkins are leaving the confines of the station to remove and replace a failed pump module that helps keep equipment inside and outside of the space laboratory cool. The six space station residents are not in any immediate danger, but in order to get the station up to its fully functional status, the two astronauts will need to perform the spacewalks scheduled for today, Dec. 23 and, if necessary, Christmas Day (Dec. 25), NASA officials said. [Photos: Astronauts Spacewalk Outside to Fix Vital Cooling System]

For this first spacewalk, Hopkins and Mastracchio will focus on preparing the failed pump module for removal and getting the replacement module — stored outside of the station — ready for installation. Mastracchio will be connected to the space station's robotic arm during much of the spacewalk, and he is wearing the suit with red stripes. Hopkins' spacesuit has no stripes.

"We refer to it as a contingency spacewalk, and the skills really are fundamental," NASA astronaut Doug Wheelock said of the spacewalks during a NASA TV event Thursday. "We practice all of these skills, just rehearse them over and over again in the pool. The crew has done these particular skills. The skills are the same, but space always has surprises for us, especially when we go outside."

Three Russian cosmonauts also live and work aboard the space station with Mastracchio, Hopkins and Wakata. Oleg Kotov, Sergey Ryazanskiy and Mikhail Tyurin round out the orbiting outpost's Expedition 38 crew.

Spaceflight firm Orbital Sciences was scheduled to launch an unmanned Cygnus spacecraft on a resupply mission to the space station on Dec. 19, however, that launch was pushed to no earlier than Jan. 7 to accommodate the urgent spacewalks.