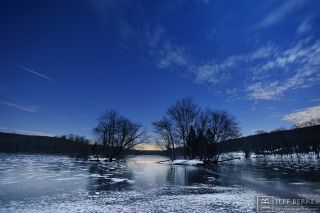 A Geminid meteor streaks across the night sky over a frozen Pennsylvania lake in this stunning image by a veteran space photographer.

"After a series of winter storms and cold temperatures, this frozen lake set the scene for the first meteor shower of the winter— the Geminids," Berkes wrote SPACE.com in an email. "Even though clouds rolled from 'Winter Storm Electra' around 9:30 p.m., I was still able to capture this meteor earlier in the night." [See more photos of the 2013 Geminid meteor shower]

The Geminid meteor shower  appears to radiate out from the constellation Gemini, and is known known for being slow, bright moving objects in the sky. Meteor showers are created when the Earth makes its way through the leftover debris of comets or asteroids. This space dust and rock are referred to as meteoroids, becoming meteors when they burn up — heated to more than 3,000 degrees Fahrenheit — in the Earth's atmosphere. Pieces of meteors that reach the planet’s surface are called meteorites.