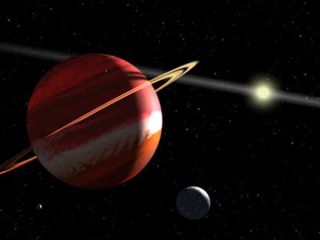 Epsilon Eridani b orbits an orange Sun-like star only 10.5 light years away from Earth. It is so close to us telescopes might soon be able to photograph it. It orbits too far away from its star to support liquid water or life as we know it, but scientists predict there are other stars in the system that might be good candidates for alien life.
(Image: © NASA, ESA, G.F. Benedict (University of Texas, Austin))

For thousands of years, humans have been wondering whether there's life elsewhere in the universe. Now, the technology finally exists to search for it.

To find extraterrestrial life, be it microbes or intelligent life, scientists need telescopes capable of detecting Earth-like planets in Earth's neighborhood and ways to detect biological signatures of life or signs of alien technology. While some of these tools already exist, astrobiologists asked the U.S. Congress Dec. 4 to invest in the next chapter of the search for life beyond Earth.

"This is the first time in human history we have the technological reach to find life on other planets," Sara Seager, a planetary scientist at MIT, said at a House Committee on Science, Space and Technology hearing today. "People will look back at us as the [generation] who found Earth-like worlds." [9 Exoplanets That Could Host Alien Life]

Astrobiology — the study of the origin, evolution, distribution and future of life in the universe — has taken a leap forward over the past few years. Members of the science committee expressed enthusiasm for the field's progress.

The Kepler mission has identified more than 3,500 potential planets outside Earth's solar system, including 10 that are Earth-size and lie within their star's habitable zone. And the space-based Hubble and Spitzer telescopes recently imaged the atmospheres of an exoplanet directly.

Meanwhile, the Mars rover Curiosity has found evidence that past conditions on the Red Planet could have supported life. Here on Earth, scientists have found examples of microbes living in the most extreme environments imaginable, from volcanic lakes to glaciers. Find life in such unlikely places suggests it could exist in harsh environments on other planets,

After 50 years, humanity is now in an era when it can provide data for whether life exists elsewhere in the universe, Mary Voytek, NASA's head of astrobiology, told members of Congress.

A key part of these efforts will be to look for biological signatures in the atmospheres of other planets. For example, oxygen doesn't last long by itself, so the presence of oxygen would indicate living organisms were producing it. Another necessity for life on Earth is water, and scientists just announced they have found signatures of water in the atmospheres of five planets (although they are superhot, Jupiter-size planets).

NASA's TESS (Transiting Exoplanet Survey Satellite) telescope, set to launch in 2017, will search for exoplanets using the transiting method the Kepler mission used to detect planets crossing in front of their host star. The James Webb Space Telescope, scheduled to launch in 2018, will be able to peer more closely at some of the planets detected by TESS.

Ultimately, scientists want to image planets directly, but this requires blocking out light from a star so that a planet would be visible. Using a telescope attachment called an internal coronagraph is one way to do this; another way is to build a star shade, a large object shaped like a flower that could be moved independently in space. Scientists need to try both methods to find one that works, Seager said.

Then there's the prospect of intelligent life. Space historian Stephen Dick, currently an astrobiology scholar at the Library of Congress, called for renewing efforts to look for intelligent life via the search for extraterrestrial intelligence (SETI).

"No bio-signatures would be more important than a radio signal — especially if they have something to say," Dick said.

And if scientists find life out there, then what?

"The plan is to confirm it first, then tell everybody," Dick said.