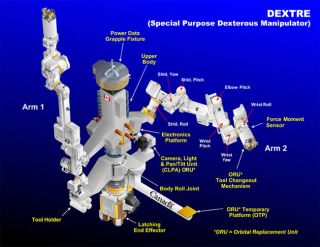 DEXTRE is a sophisticated dual armed robot, which is part of Canada's contribution to the International Space Station (ISS). Along with Canadarm2, whose technical name is the Space Station Remote Manipulator System, and a moveable work platform called the Mobile Base System, these three elements form a robotic system called the Mobile Servicing System (MSS). The three components have been designed to work together or independently.
(Image: © CSA)

CAPECANAVERAL -- A two-armed android launched from Cape Canaveral and operated byan astronaut in Houstonis emerging as the leading candidate for a robotic mission to save NASA'sHubble Space Telescope, agency officials said Tuesday.

TheCanadian robot "Dextre" is shown clampedonto the Hubble telescope with its robot arm extended in this artist'srendering. Image from NASA.

Dubbed"Dextre," the Canadian robot would blastoff on an Atlas 5 or Delta 4 rocket in late 2007 and then outfit the $3 billionobservatory with fresh batteries and gyroscopes as well as two new $100 millionscience instruments.

Technicalchallenges still loom, and NASA must persuade the Bush administration andCongress to ante up an estimated $1 billion to $1.6 billion to pay for themission, which is not funded in the agency's proposed 2005 budget.

ButHubble project officials are becoming more and more confident that thetelescope can be serviced with robots rather than spacewalking shuttleastronauts.

"Therewere many skeptics, including me, when the idea of a robotic servicing missionfirst came up," said David Leckrone, Hubbleproject scientist at NASA's Goddard Space FlightCenter in Greenbelt, Md."But I've become a convert."

Thefate of NASA's flagship observatory has been in orbit since January.

Insistingthat a shuttle mission to Hubble would be too dangerous in the wake of the 2003Columbiaaccident, NASA Administrator Sean O'Keefe canceled a fifth servicing flight tothe observatory. Without repairs, the telescope is expected to fail by 2007 or2008.

Anoutcry from the public, scientists and members of Congress prompted NASA toexamine the possibility of a robotic servicing mission. The agency came up witha scheme, fielded additional ideas from industry and began in-house tests.

Ina series of long-distance tests, NASA astronaut Michael Massiminohas been sitting at a control console in Houstonand operating a prototype robot in Maryland.The idea is to practice work that would have to be done on an unmannedservicing flight.

Thosetests and others convinced O'Keefe this week to tell Hubble project engineersto press ahead with development work.

"Hewas very impressed with the work that had been done to flesh out the roboticservicing option," NASA science mission chief AlDiaz said.

Theaim now is to determine by next summer whether a robotic mission could becarried out successfully -- and in time.

Ifnot, NASA instead will launch a propulsion module that would autonomously linkup with Hubble and propel it back through the atmosphere and into the Pacific Ocean.

The13-ton observatory lacks its own propulsion system. Without a propulsion moduleto control the telescope's re-entry, surviving Hubble debris could rain down onpopulated areas.

Leckrone, Diaz andothers, however, now think a full up robotic servicing mission could work.Here's how such a flight might unfold:

Anew set of gyroscopes would piggyback on the planetary camera. Fresh batterieswould be mounted on the tail end of the propulsion module and then the robotwould wire them up to the telescope's power-producing solar wings.

Andproject officials said it also would help NASA develop the type of technologiesthat eventually will be needed to carry out future human and robotic missionsbeyond Earth orbit.