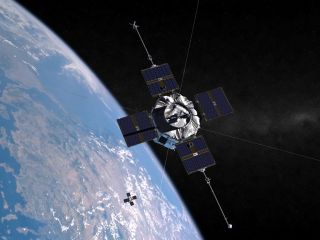 The Radiation Belt Storm Probes Mission, part of NASA's Living With a Star program, will provide unprecedented insight into the physical dynamics of the radiation belts.
(Image: © NASA)

Huge electric fields in the radiation belts around Earth may help explain how electrons surrounding the planet can be accelerated to speeds near that of light, researchers have found in a new study.

These findings, detailed Dec. 2 in the journal Physical Review Letters, could help shed light on the radiation belts of planets such as Jupiter, Saturn, Uranus and Neptune, as well as the behavior of the sun during flares and of bodies beyond the solar system, such as stellar nurseries, neutron stars and incredibly energetic black holes known as quasars.

These belts generally consist of two rings: an inner zone with both high-energy electrons and very energetic positive ions that remains stable in intensity over the course of years to decades; and an outer zone made up mostly of high-energy electrons whose intensity swings over the course of hours to days, primarily depending on the influence from the solar wind, the deluge of radiation streaming from the sun. Earlier this year, scientists also detected a third radiation belt temporarily surrounding Earth.

The gigantic amounts of radiation the Van Allen belts generate can pose serious risks for satellites. To learn more about them, NASA launched twin spacecraft, the Van Allen probes, in the summer of 2012. The satellites are armed with a host of sensors to comprehensively analyze the plasma, energetic particles, magnetic fields and plasma waves in these belts with unprecedented sensitivity and resolution.

Now, using the Van Allen probes, scientists have detected structures that pop in and out of existence in the outer belt that could help explain the high-energy electrons seen in that zone.

The structures in question are known as "double layers." They are each made up of a pair of parallel layers of particles with opposite electrical charge that move along Earth's magnetic field. The probes saw huge numbers of double layers in the outer belt —7,000 in the course of a minute, each lasting on the order of seconds.

These double layers were discovered "sort of by accident as the Van Allen probes passed through this region of space, and only captured a snapshot," said study lead author Forrest Mozer, a physicist at the University of California, Berkeley."The spacecraft will get back to this region maybe eight months, maybe 10 months from now, and we're setting up our instruments to do what we now know they should — to collect data at that site then with a continuous view, to really get definitive information on what is going on there."

The double layers can in combination generate strong electric fields, ones more than 1 million volts strong. The researchers suggest the combinations of double layers seen in the outer belt are powerful enough to drive electrons to relativistic speeds, ones near the speed of light.

"It has been surprising that there are mechanisms that accelerate electrons to relativistic energies in Earth's radiation belt and throughout all of astrophysics," Mozer said. "There have been a lot of theories about what those mechanisms are, but many of them have shown not to work."

These findings suggest double layers may help drive electrons to relativistic speeds elsewhere in the cosmos.

"These results provide one step in shedding light on the processes that can lead to rapid acceleration of electrons to relativistic energies," Mozer told SPACE.com. "The processes we're starting to define certainly could be at work in regimes like the sun, for example, and probably all throughout astrophysics."