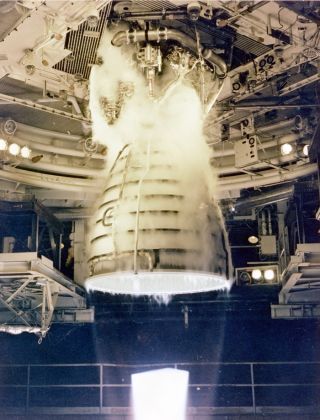 In this historical photo from the U.S. space agency, a Space Shuttle Main Engine (SSME) undergoing a full power level 290.04 second test firing at the National Space Technology Laboratories (currently called the Stennis Space Center) in Mississippi. The firings were part of a series of developmental testing designed to increase the amount of thrust available to the Shuttle from its three main engines. The additional thrust allowed the Shuttle to launch heavier payloads into orbit.