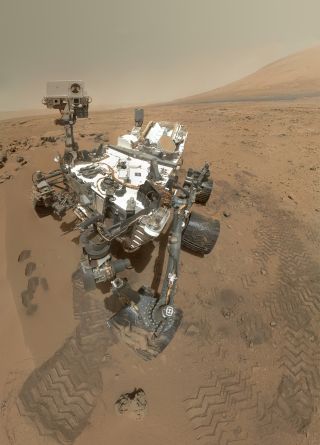 NASA's Curiosity rover has bounced back from a glitch that put the 1-ton robot into a protective "safe mode" for three days over the weekend.

The car-size Curiosity rover went into safe mode Thursday (Nov. 7), a few hours after receiving a software update from its handlers on Earth. But mission engineers have identified and fixed the problem, allowing Curiosity to resume normal operations on Sunday (Nov. 10), NASA officials said.

"We returned to normal engineering operations," Rajeev Joshi, a mission software and systems engineer at NASA's Jet Propulsion Laboratory in Pasadena, Calif., said in a statement Tuesday (Nov. 12). "We are well into planning the next several days of surface operations and expect to resume our drive to Mount Sharp this week."

Curiosity began heading toward the towering Mount Sharp in early July and has covered about one-third of the 5.3-mile-long (8.6 kilometers) trek to date, NASA officials said recently.

The recent glitch was caused by an error in Curiosity's onboard software, which resulted in an error in a catalog file, mission team members said. When the new version of Curiosity's software processed the faulty catalog file on Thursday, the rover automatically rebooted its software and went into safe mode.

"The team was able to replicate the problem on ground testbeds the following day," NASA officials wrote in a mission update Tuesday. "Commands recovering the spacecraft were uplinked to the spacecraft early Sunday morning."

Curiosity has been exploring Mars' 96-mile-wide (154 km) Gale Crater since August 2012, when it aced a daring and unprecedented landing that saw the rover lowered to the Red Planet's surface by a rocket-powered sky crane.

The mission's chief goal is to determine if Mars has ever been capable of supporting microbial life. Curiosity has already answered that question in the affirmative, finding evidence that a site called Yellowknife Bay was indeed habitable billions of years ago.

The mission is far from over, however. Mission scientists are excited to explore the 3.4-mile-high (5.5 km) Mount Sharp; they want Curiosity to climb up through the mountain's foothills, reading the history of Mars' changing environmental conditions as it goes.