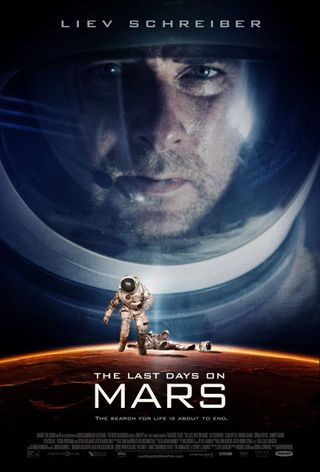 A new movie starring Liev Schreiber may be a great combination of true terror and fictional spaceflight. "The Last Days On Mars," set for limited theatrical release in the United States on Dec. 6, follows a band of astronauts during an ill-fated mission to a base on Mars. In the words of the movie's tagline, "the search for life is about to end."

In a trailer for the film, Schreiber and his fellow world explorers are on their last day of the Martian mission when things start to come off the rails. Two astronauts are caught outside of the base when the ground gives out under them and they fall into a pit. From there, havoc ensues. Whatever is in the pit is "definitely alive," according to one Red Planet scientist, and now they need to figure out where their friends went. The two and a half minute trailer even comes complete with a line about "blood everywhere" and a creepy looking hand triggering an alarm system in the colony. Watch the movie trailer in the window below:

Impatient for the movie to get into theaters? "The Last Days On Mars" will be available through video on demand on Oct. 31. How do you think this new space movie looks? Let us know in the comments.