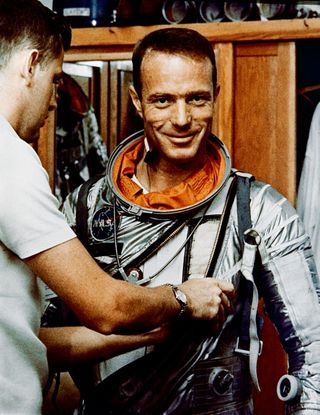 Diamond Rain, a Watery Asteroid and a Lonely Planet

The European Space Agency’s Gravity field and steady-state Ocean Circulation Explorer (GOCE) is nearing its nosedive to Earth. GOCE was launched in 2009 into a Sun-synchronous, near-circular polar orbit by a Russian Rockot vehicle from the Plesetsk Cosmodrome. In today’s dollars, the mission is a $475 million effort, including launcher and operations. [Full Story]

The fourth U.S. astronaut to fly in space and the second to orbit the Earth, Scott Carpenter, 88, died on Oct. 10 after suffering a recent stroke. [Full Story]

NASA's Sunjammer mission successfully deployed a quadrant of its solar sail in a test on Monday (Sept 30), revealing that the craft should be ready to function successfully following its January 2015 launch. [Full Story]

NEXT: Beer In Space: 11-Year-Old's Tiny Brewery Will Fly to Space Station

In a couple months, the astronauts on the International Space Station will get an alcoholic treat, courtesy of a sixth grader. [Full Story]

NEXT: Lonely Alien Planet Discovered Without a Parent Star

Astronomers have discovered a lonely planet that's floating by itself in deep space without orbiting a star. [Full Story]

Scientists say that a white dwarf beyond our solar system known as GD 61 has destroyed a rocky, water-rich planetary body; before it was reduced to a dusty, circumstellar disk, this particular exoplanet or asteroid was composed of about 26 percent water by mass, according to the researchers. It is how Earth will ultimately die, they add. [Full Story]

NEXT: First Evidence of Comet Striking Earth Found in Egypt

A team of scientists claims to have found the first-ever definitive evidence of a comet striking Earth. [Full Story]

If Google Maps existed back in 1969 and included directions for navigating to the surface of the moon, Neil Armstrong and Buzz Aldrin might have plugged in "Tranquility Base" and been told to begin their descent by passing over "Mount Marilyn" on their way to mankind's first lunar landing. [Full Story]

NEXT: Diamond Rain May Fill Skies of Jupiter and Saturn

Diamond Rain May Fill Skies of Jupiter and Saturn

Jupiter and Saturn might just be a girl’s best friend. The two distant gas giants might be overflowing with diamonds, new research shows.[Full Story]

The strongest solar flare in nearly two months erupted from the sun Tuesday (Oct. 8), causing a minor geomagnetic storm as charged particles from the sun passed by the planet. [Full Story]