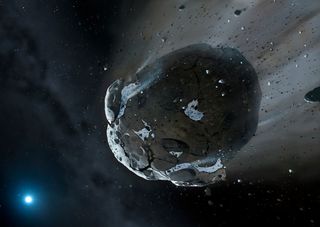 Artist's impression of a rocky and water-rich asteroid being torn apart by the strong gravity of the white dwarf star GD 61. Similar objects in the solar system likely delivered the bulk of water on Earth and represent the building blocks of the terrestrial planets.
(Image: © Mark A. Garlick, space-art.co.uk, University of Warwick and University of Cambridge)

Astronomers have found the remains of a large, water-soaked asteroid orbiting a superdense dying star, suggesting that planets capable of supporting life may once have existed in the system.

The researchers found signs of a rocky surface and lots of water in the atmosphere of a white dwarf star called GD 61, marking the first time that these two critical ingredients of a potentially habitable planet have been found together beyond Earth's solar system.

"The finding of water in a large asteroid means the building blocks of habitable planets existed — and maybe still exist — in the GD 61 system, and likely also around a substantial number of similar parent stars," study lead author Jay Farihi, of Cambridge University in England, said in a statement. [9 Exoplanets That Could Host Alien Life]

"These water-rich building blocks, and the terrestrial planets they build, may, in fact, be common — a system cannot create things as big as asteroids and avoid building planets, and GD 61 had the ingredients to deliver lots of water to their surfaces," Farihi added. "Our results demonstrate that there was definitely potential for habitable planets in this exoplanetary system."

Asteroid shards around a dying star

GD 61, which lies about 150 light-years from Earth, is a sunlike star in its death throes. About 200 million years ago, it collapsed into a planet-size, ultracompact object called a white dwarf— the same fate our own sun will face 6 billion or so years from now.

Farihi and his colleagues analyzed observations of GD 61 made by the Cosmic Origins Spectrograph, an instrument onboard NASA's iconic Hubble Space Telescope. They saw magnesium, silicon, iron and oxygen in the white dwarf's atmosphere — clear evidence that GD 61 had torn apart and absorbed pieces of a rocky body such as an asteroid.

And there was so much oxygen that not all of it could have been bound up in rock. In fact, the team calculated that the shredded asteroid must have contained about 26 percent water, making it roughly as wet as the dwarf planet Ceres in Earth's solar system.

The researchers further concluded that the object was an asteroid rather than a comet, because its pulverized pieces contained no carbon (and comets are carbon-rich).

The Hubble data suggest that the asteroid was originally at least 56 miles (90 kilometers) wide, and likely much larger — perhaps about the size of Vesta, a protoplanet in our solar system that measures about 330 miles (530 km) from end to end.

The doomed rock was probably booted toward GD 61 by the gravitational influence of one or more large planets orbiting farther from the white dwarf, Farihi said.

It's possible that the rock that polluted GD 61's atmosphere was a fragment of a fully formed exoplanet, but Farihi thinks it's much more likely a building block of such a world.

"I don't see how a planet would be torn apart, necessarily," he told SPACE.com.

Either way, the watery rock's (former) existence is a big deal, Farihi said.

"That kind of rock together with water chemistry — like the Earth's surface, basically — that has never been seen before," he said.

The asteroid also represents the sort of object that may have delivered water to Earth early in the planet's history, researchers said. Scientists think Earth was relatively dry when it formed but accumulated enough water to fill surface oceans from asteroids that slammed into the planet long ago.

Further, the technique utilized in the new study — analyzing the "polluted" atmosphere of a white dwarf — marks a promising new direction in the field of exoplanet science, Farihi said. Astronomers have been discovering alien worlds at an impressive clip recently, thanks to observations by NASA's Kepler spacecraft and other instruments, but they still have a very tough time determining what such planets are made of.

"This gives us actual chemistry, which tells us so much more than just, 'OK, there's something there,'" Farihi said. "Knowing what these things are made of really gives us a different angle."