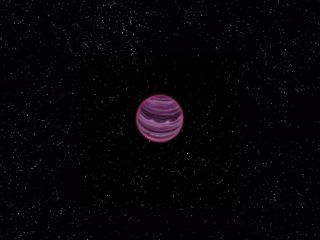 Astronomers have discovered a lonely planet that's floating by itself in deep space without orbiting a star.

The powerful Pan-STARRS 1 (PS1) telescope at the summit of Maui's Haleakala volcano in Hawaii first detected the solitary alien world through a faint heat signature 80 light-years from Earth while it was searching for brown dwarfs.

Dubbed PSO J318.5-22, the exoplanet is relatively young at 12 million years old, researchers say. With a mass about six times that of Jupiter, the planet resembles gas giants that orbit young stars, follow-up observations with other telescopes showed. But the one thing it appears to be missing is a parent star. [See Images of the Strangest Alien Planets]

"We have never before seen an object free-floating in space that that looks like this. It has all the characteristics of young planets found around other stars, but it is drifting out there all alone," study researcher Michael Liu, of the Institute for Astronomy at the University of Hawaii at Manoa, said in a statement. "I had often wondered if such solitary objects exist, and now we know they do."

The absence of a bright star could be a boon for scientists trying to understand the nature of planets outside our solar system, only a handful of which have been observed through direct imaging. Researchers typically study these alien worlds through indirect means, such as watching for the dips in starlight that occur when an exoplanet crosses in front of its star.

"Planets found by direct imaging are incredibly hard to study, since they are right next to their much brighter host stars," Niall Deacon, of the Max Planck Institute for Astronomy in Germany, explained in a statement. "PSO J318.5-22 is not orbiting a star so it will be much easier for us to study. It is going to provide a wonderful view into the inner workings of gas-giant planets like Jupiter shortly after their birth."

The number of known exoplanets has exploded over the past 10 years. Astronomers have confirmed more than 800, but some estimates suggest there are likely be tens of billions of exoplanets in the universe.

PSO J318.5-22 was inadvertently discovered during a survey of brown dwarfs, starlike cosmic objects sometimes called "failed stars" because they are bigger than planets but too cold to flare up into a veritable star.

In their search for the dim red signals of brown dwarfs, astronomers chose to use PanSTARRS 1 (PS1), short for Panoramic Survey Telescope and Rapid Response System, which takes the equivalent of 60,000 iPhone photos each night.

"We often describe looking for rare celestial objects as akin to searching for a needle in a haystack," Eugene Magnier of the Institute for Astronomy said in a statement. "So we decided to search the biggest haystack that exists in astronomy, the dataset from PS1."

In their survey, they spotted PSO J318.5-22, an object redder than even the reddest known brown dwarfs. The researchers watched the planet for two years and concluded that it lies in a collection of 12-million-year-old stars called the Beta Pictoris moving group.

Observations with other telescopes found signatures in the cosmic body's infrared light that are best explained by it being young and low-mass. In fact, PSO J318.5-22 is one of the lowest-mass free-floating objects known, the researchers say.

The discovery will be detailed in Astrophysical Journal Letters but the study is available online now on the preprint service Arxiv.