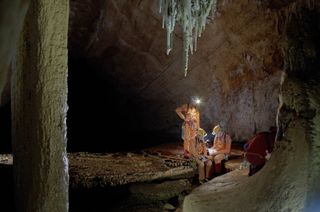 Six astronauts have emerged from an Italian cave after nearly a week underground to get a taste of the isolation and danger that will confront them on a space mission.

The expedition was part of the European Space Agency's two-week CAVES exploration course, which trains spaceflyers to work together in multicultural teams under difficult conditions.

CAVES — short for Cooperative Adventure for Valuing and Exercising human behavior and performance Skills — is designed to be as similar to spaceflight as possible. [The 9 Coolest Mock Space Missions]

As with any mission, the 2013 CAVES astronauts spent some time in training to make sure they were familiar with the procedures they need. Then they descended into the darkness of Sa Grutta cave, on the Italian island of Sardinia, with a list of science tasks to accomplish.

"The daily routine on the [International Space] Station follows a timeline of activities largely oriented toward science experiments. In the cave, the team also followed a daily plan, working long days to push the survey forward and document knowledge of the topography of the cave," the CAVES team wrote in a Sept. 27 blog post.

"As we extended our survey, samples were taken for later analysis of water chemistry, microbiology of soil and surfaces, and atmosphere for CO2 [carbon dioxide], temperature and humidity," team members added.

If anything, the astronauts can occasionally find themselves in more danger below the ground than they would above it. Indeed, ESA says it would likely take more time to extract astronauts from Sa Grutta in the event of an emergency than it would to get crewmembers home from the International Space Station.

To keep astronauts as healthy as possible, CAVES organizers stick to a schedule, choose food that isn't apt to spoil and plot the safest routes possible through the subsurface.