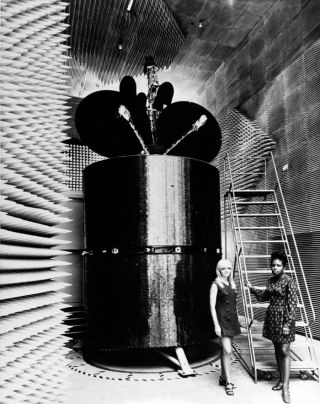 In this historical photo from the U.S. space agency, the communication satellite Intelsat IV stands in an anechoic (sound-absorbing) chamber with two female employees on July 5, 1972. It stood over 17 feet tall with an average of 6,000 voice grade circuits. Hughes Aircraft Company built the Intelsat IV satellite.

Intelsat or the International Telecommunications Satellite was an international organization of 65 nations that was established August 20, 1964 out of the growing demand for channels of communication and greatly expanded the commercial communications network. The Intelsat IV was placed in a synchronous orbit over the Atlantic with the capacity of about 6,000 circuits or 13 television channels.