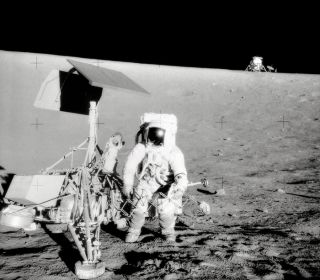 In this historical photo from the U.S. space agency, Charles Conrad Jr., Apollo 12 Commander, examines the unmanned Surveyor III spacecraft during the second extravehicular activity (EVA-2) on Nov. 20, 1969. The Lunar Module (LM) "Intrepid" is in the right background.