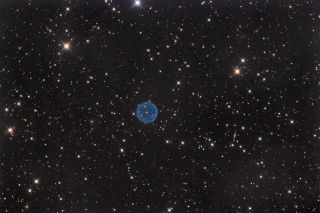 The blue sphere seen here in this cool night sky photo is the shell of unique planetary nebula, Abell 39.

Astrophotographer Bob Franke captured this stunning image Abell 39 from the Focal Pointe Observatory in Chino Valley, Ariz. The nebula is located in the constellation Hercules roughly 6,800 light-years away from Earth. It is considered a low-surface brightness planetary nebula characterized by an almost-perfect spherical shell and a slightly off center (0.1 light-years) central star. A light-year is the distance light travels in one year, or about 6 trillion miles (10 trillion kilometers).

Despite their name, planetary nebulas have nothing to do with planets. They are actually the cast-off gas shell from stars near the end of their lifecycle. The first planetary nebula was discovered in 1764 by noted astronomers Charles Messier. But it was not until 1790 that the 18th-century astronomer William Herschel discovered that the objects were made up of gas and dust. Herschel, who had recently discovered the planet Uranus at the time, coined the term "planetary nebula" because of how the objects resembled planets in the night sky.