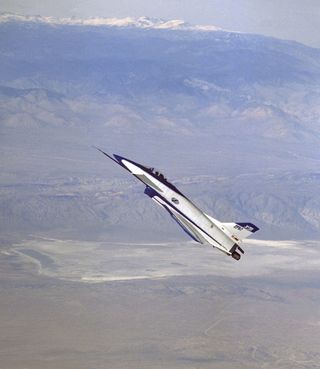 In this historical photo from the U.S. space agency, the X-31 aircraft, on a research mission from NASA's Dryden Flight Research Center, Edwards, California, is flying nearly perpendicular to the flight path while performing the Herbst maneuver in March of 1994.

Effectively using the entire airframe as a speed brake and using the aircraft's unique thrust vectoring system to maintain control, the pilot rapidly rolls the aircraft to reverse the direction of flight, completing the maneuver with acceleration back to high speed in the opposite direction. This type of turning capability could reduce the turning time of a fighter aircraft by 30 percent.