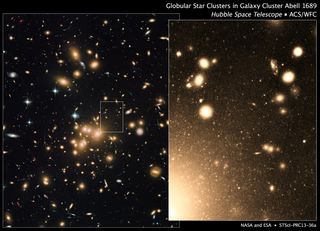 A new image from NASA's Hubble Space Telescope shows an enormous collection of galaxies and star clusters in stunning detail.

Hubble spied 10,000 or so of the estimated 160,000 globular star groupings thought to reside in the huge galaxy cluster Abell 1689, which lies about 2.25 billion light-years away from Earth. For comparison, our own Milky Way galaxy has only about 150 globular clusters, which are spherical clumps of old stars tightly bound by gravity.

The telescope's new observations — which focused on the center of Abell 1689 and incorporated both visible and infrared data — could help shine a light on dark matter in the galaxy cluster's region. Dark matter is a mysterious substance believed to make up much of the universe but which can only be seen through its effects on other objects. [Take a video tour of the massive group of globular star clusters]

For example, the 10,000 globular clusters Hubble spotted are most abundant in the middle of Abell 1689, where dark matter is pooled, then thin out as the distance to the center increases.

"In other words, if you know how many globular clusters are within a certain distance, we can give you an estimate of the amount of dark matter," Karla Alamo-Martinez, a member of the research team who is an astrophysicist at National Autonomous University of Mexico, said in a statement.

Based on the new Hubble observations, astronomers estimate that Abell 1689 has 160,000 of these clusters in a stretch of 2.4 million light-years.

While dark matter is invisible to conventional observing equipment, its presence can be inferred through effects such as gravitational lensing.

First described by Albert Einstein, gravitational lensing occurs when huge foreground objects bend light from other, more distant bodies, often making galaxies visible that are actually behind other objects from a vantage point on Earth. Mapping such light distortions is one way to trace dark matter's location.

Because globular clusters are old — most of them formed within the first few billion years of the universe's 13.7-billion-year history — astronomers described the groupings in Abell 1689 as "fossils of the earliest star formation" in the region.

"Our work shows [the clusters] were very efficient in forming in the denser regions of dark matter near the center of the galaxy cluster," said John Blakeslee, the lead researcher and an astrophysicist at Dominion Astrophysical Observatory in Canada, in a statement.

"Our findings are consistent with studies of globular clusters in other galaxy clusters, but extend our knowledge to regions of higher dark matter density," he added.

Researchers hope to get an even better look at the cluster when NASA's James Webb Space Telescope's more sensitive infrared lens goes into orbit, which is scheduled to happen in late 2018.

A paper based on the research will appear in the Sept. 20 issue of The Astrophysical Journal.