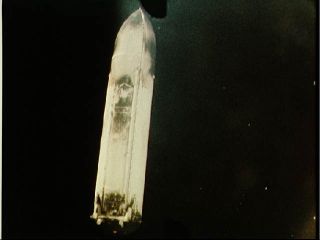 While testswere unfinished as NASA prepared STS-1 for its maiden flight, engineers paintedthe first two tanks to be on the safe side, Chapman said.

"Becauseyou just don't go up to the external tank on the pad with a can of paint and aroller," Chapman told SPACE.com, adding that he, former shuttle tankproject manager Sandy Coleman and Kennedy Space Center (KSC) director JimKennedy watched Columbia's April 12, 1981 launchdebut from the roof of a Winnebago the trio had driven to KSC with threeother coworkers from MSFC.

Subsequenttests found that the paint wasn't vital for shuttle launches and it wasabandoned to free up weight - about 600 pounds (272 kilograms) - for additionalpayload, NASA officials said.'

The paintalso did not prevent foam from popping free of Columbia's fuel tank during itsfirst two launches, Chapman added.

Followingthe Feb. 1, 2003 loss of Columbia during reentry, which investigators found wasdue to heat shield damage caused by tank foam insulation debris at launch, NASArevisited the white paint approach, as well as a myriad other schemes to reducefoam shedding.

But addingadditional protection measures, such as a nylon covering or chicken wire mesh,could not only add another debris source during launch, but also lead to largerpieces pulling free from anchored spots, Chapman said.

"Thebiggest thing for us would be to make sure that anything we do doesn't causemore harm than good," Chapman said.

Since the2003 Columbia accident - and NASA's subsequent July-August 2005 STS-114 return to flight missionin which unacceptablylarge chunks of foam were also shed during launch - tank engineers havefocused on reducing the amount of foam insulation on future tanks.

Engineersare also replacing a set of enginecut-off sensors inside the next tank to fly, and preparing for large-scalewind tunnel tests to evaluate the removal of a largefoam ramp that shed unacceptably large pieces of debris during the STS-114flight.

"We do alot of subscale wind tunnel tests, but this will be a closer to a full-sizetest," Chapman said of the upcoming checks.